The new violence in Xinjiang’s capital erupted only a few hours after the city’s top officials told reporters the streets in Urumqi were returning to normal following a riot that killed 156 people Sunday. The officials also said more than 1,000 suspects had been rounded up since the spasm of attacks by Muslim Uighurs against Han Chinese, the ethnic majority.

The chaos returned when hundreds of young Han men seeking revenge began gathering on sidewalks with kitchen knives, clubs, shovels and wooden poles. They spent most of the afternoon marching through the streets, smashing windows of Muslim restaurants and trying to push past police cordons protecting minority neighborhoods. Riot police successfully fought them back with volleys of tear gas and a massive show of force.

At one point, the mob chased a boy who looked like he was a Uighur. The youth, who appeared to be about 12, climbed a tree, and the crowd tried to whack his legs with their sticks as the terrified boy cried. He was eventually allowed to leave unharmed as the rioters ran off to focus on another target.

After the crowds thinned out, a curfew was announced from 9 p.m. to 8 a.m. Police cars cruised the streets in the evening, telling people to go home, and they complied.

The ugly scenes earlier in the day highlighted how far away the Communist Party was from one of its top goals: creating a «harmonious society.» The unrest was also an embarrassment for the Chinese leadership, which is getting ready to celebrate the 60th anniversary of Communist rule and wants to show it has created a stable country.

On Tuesday, officials arranged a tour for journalists of sites that were attacked by Uighur rioters on Sunday. But the public relations event backfired spectacularly during the tour’s first stop — a car dealership in southern Urumqi where several autos were burned by rioters.

After interviewing people at the business, the journalists crossed the road to a Uighur market, where angry women in traditional, brightly colored headscarves began to gather.

One woman who gave her name as Aynir said police arrived Monday evening and arrested about 300 men. The authorities were looking for men with fresh wounds or other signs they joined the rioting.

«My husband was detained at gunpoint. They were hitting people. They were stripping people naked. My husband was scared so he locked the door, but the police broke down the door and took him away,» Aynir said. «He had nothing to do with the riots.»

The crowd of women swelled to about 200 and they began marching in the street, chanting, «Freedom!» and «Release our children!» They were quickly sandwiched by hundreds of police on both ends of the road, along with trucks with water cannons. Some women screamed at the security forces and jostled the men, who were armed with assault rifles, tear gas guns, shields and sticks. The crowd dispersed after a standoff that lasted 90 minutes. 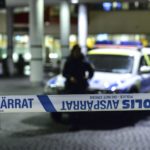