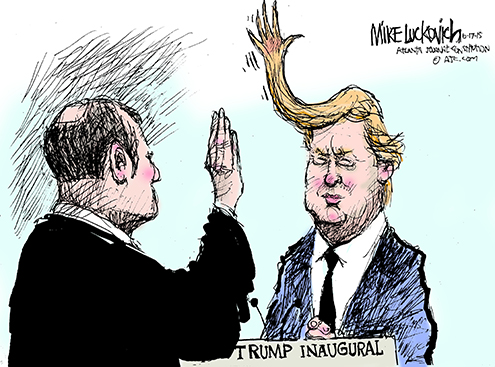 So there will be no «Madam President» issue of Time magazine, although whether they’ll be magnanimous enough to make Trump «Man of the Year» remains to be seen. Hillary at her convention claimed to be «shattering the glass ceiling» for women, and booked her victory party at the Jacob Javits Center, which has an actual glass ceiling. But she wasn’t shattering anything. She was never Margaret Thatcher or Angela Merkel. She wasn’t Theresa May in Britain, or Julia Gillard in Oz, or Jenny Shipley and Helen Clark in NZ, or even Kim Campbell up north. She was the previous guy’s wife, which is classic banana-republic stuff and ought to be cringe-makingly embarrassing to any genuine «progressive» or «feminist».

But Trump really did shatter the glass ceiling. We’re told that «anyone can grow up to be president», but in practice you have to be a politician or have won the Second World War. Trump is the first non-«public servant» to shatter the glass ceiling. He’s proved you can win the presidency without being a Bush or a Clinton or a lifetime member of the political class. He’s proved you can shatter the glass ceiling and win without the consultant class, without donors, without focus groups, without a gazillion-dollar ad budget, without your own party’s office-holders and intellectuals, and without a «ground game» – without turnout models, without field offices, without three lame-o cardboard mailers poking out of your post-office box every day. In dispensing with all the rubbish that makes American politics as remote and ritual-bound as Chinese opera, he has performed a signal service to this republic.

Trump also proved you can shatter the glass ceiling and lead the biggest Republican Party victory (White House and Congress) since 1928 by saying every 20 minutes «outrageous» things that outrage no normal person and that, even if you’re ever so mildly peeved by them, are never going to take priority over the economy or health care or foreign policy when it comes to determining your vote. Example: Me back in July 2015, a month after Trump entered the race and a couple of days after he’d supposedly insulted «all veterans» by dissing John McCain:

A New Hampshire neighbor of mine, a Vietnam vet exposed to Agent Orange and thus given cancer as a war-losing bonus, just received the usual letter from the VA telling him his benefits were being cut. Oddly enough, he loathes McCain and is gung-ho for Trump. Do you want to bet he’s in a minority down at the Legion? John McCain doesn’t embody the grand variety and diversity of America’s warriors; John McCain embodies John McCain: That’s it. So, when the Republican establishment spends two news cycles huffing about the amour propre of a wealthy career politician, they’re only reinforcing Trump’s critique: that the GOP is a party of «losers» and «failures» obsessed with peripheral trivia nobody else cares about, while ignoring everything that’s killing your future.

And that’s the most important sense in which Trump shattered the glass ceiling. As the Brexiteers did across the Atlantic, he bucked the bipartisan consensus, overwhelmingly supported by the media, the crony capitalists and the donor class, that remorseless mass unskilled immigration takes priority over the rights and lives of their own citizens. Trump turned the armies of the «culturally dispossessed» into just another aggrieved minority group, and the new minority came out in enough numbers to make them a majority. If both left and right regard Trump’s victory as a horror show, well, you created the monster: The establishment of both parties spent the last year telling his supporters they no longer mattered – they’re too old, too white, too male, too bluecollar, too rust-belt, too too tootsie, g’bye; they’re old and fading and they’ll be dead soon. This is, in fact, an over-broad generalization: Trump pulled more millennials than Romney, and more of the Latino vote, and he doubled Mitt’s share of the black vote.

Even so, it was too much to expect this New America to wait for this old, irrelevant America actually to kick the bucket: they had to hasten ’em into the grave by endless taunting that everyone matters more than you. So that, in nothing flat, transgendered rights suddenly become a huge urgent public-policy priority requiring instant federal bathroom ordinances and congratulatory calls from the White House to Caitlyn Jenner. And you’ve never met a transgendered person or know anyone who’s met one – and yet they matter, and you and millions like you don’t. And both the left’s social-justice warriors and the right’s psephologists are insisting that you’ll matter even less next time.

Yesterday, the dispossessed said they’re tired of being told they don’t count – and, in terms of the electoral arithmetic, demonstrated that in fact the experts can’t count.

The rap on Trump is that he’s not a conservative – and, to judge from my inbox and Twitter feed, that he is in fact a liberal Democrat. On the first point, I would argue he’s a conservative in the most basic, primal sense of national sovereignty, which is the organizing principle of the functioning world. As for whether he’s a liberal, well, he’s certainly supported Democrats in the past. But so what? Winston Churchill was a Liberal who became a Conservative – and was the indispensable man at the hinge moment of the 20th century. And no, I’m not saying Trump is the new Churchill; it’s more basic than that: Politics is supposed to be the art of persuasion: If you’re arguing that a former Democrat cannot become a Republican, can only be a Trojan Horse, a Democrat cuckoo in your GOP nest, then you’re saying that you’re not in the persuasion business – and therefore you’re not in politics, you’re just trapped in a sterile, pointless, reductive tribalism.

I want American conservatism to get back in the persuasion business, and in that respect it would behoove some of the mainstays of the «movement» to engage in a moment of reflection. Too many professional conservatives at the magazines and think-tanks have been talking to themselves for too long and don’t even see the glass ceiling above their own heads. That’s the one that needs shattering.

PS In this bright new dawn and/or leap into the unknown, why not pick out some new TV entertainment to go with your brand new political landscape? The Mark Steyn Show starts in less than a month and will be surveying the new scene five nights a week: you can watch it from around the world via Amazon or Apple or any other known delivery system. For more details, and to subscribe at the low introductory rate, see here.