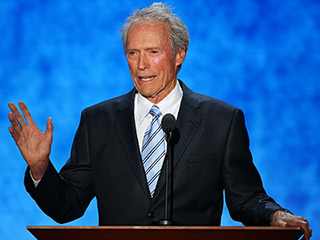 Clint Eastwood’s appearance Thursday on the national political stage had many of those same elements. There’s no dearth of Hollywood celebrities willing to air their political views, but most of them are securely on the left. Surely aware of the opprobrium and ridicule that would come from a press corps that largely tilts left as well, an 82-year-old Hollywood legend steps up to the podium, and in his own way, with grit and (shock! horror!) humor, tells the country what he thinks is right.

He doesn’t have to do it. He’s a giant of the film industry, replete with a long, successful career. People from both parties have enjoyed his movies for decades. He could have stayed home. But he goes and does it anyway, because he believes there’s something important at stake. And in a country sinking under government spending and debt and ever more smothered in regulatory edicts, he reminds Americans of a basic verity — that it is we, the people, not the politicians, who own this country. “Politicians are employees of ours.” Were that a scene in a Clint Eastwood movie, it would be a good one.

But this wasn’t a movie. Unlike the fictitious Dirty Harry, who can walk off into the sunset as the credits roll, this was the real Clint Eastwood, speaking to the real world, despite the furies that were sure to descend. Make what you like of his improv comedy with the chair — a display of humor which in the no-holds-barred world of politics was actually pretty mild stuff, and something from which even the most traumatized members of the viewing audience will probably recover. In terms of a man standing up for his convictions, putting himself on the line, never mind the critics, this was his finest hour.