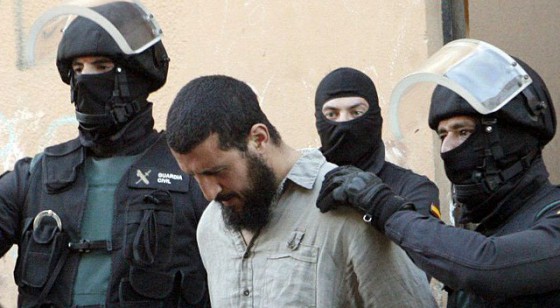 All of the detainees have Spanish passports, and one of them was part of AQIM, Al Qaeda in the Islamic Maghreb, a terrorist group that kidnapped and held two Spanish aid workers in the Sahel area in October 2011. The six suspects will be brought before the High Court in Madrid.

Police sources suspect that around 1,000 Moroccans who have been in combat in Syria will be returning home in the coming weeks or months. A few days ago one such individual showed up at the Spanish consulate in Turkey expressing his desire to return to Melilla after spending a few months in Syria.

The network had sent at least 26 jihadists (24 Moroccans and two Spaniards) to join Al Qaeda’s terrorist groups in the Sahel, according to the Interior Ministry.

Some of the detainees were in charge of an online movement called “Sharia4Spain,” a branch of the “Global Movement Sharia4” that has a presence in many countries. These branches disseminate large amounts of jihadist material online, with the goal of recruiting supporters for specific terrorist actions.

The original British-based group that began the “Global Movement Sharia4” has been declared a terrorist organization by the UK Home Office.