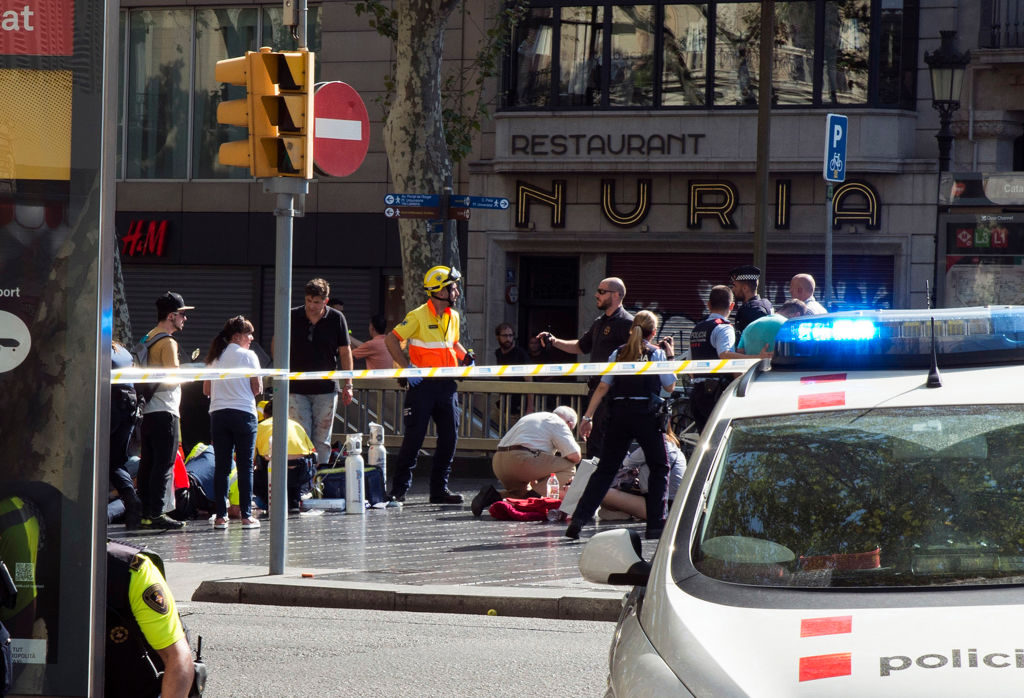 Injured people are tended to as police investigate near the scene of a terrorist attack in the Las Ramblas area on August 17, 2017 in Barcelona, Spain. Officials say 13 people are confirmed dead and at least 100 injured after a van plowed into people in the Las Ramblas area of the city this afternoon. (Photo by Nicolas Carvalho Ochoa/Getty Images)

Police in the northeastern Spanish region of Catalonia arrested 18 members of a jihadi cell plotting an attack in Barcelona — and then released all but three.

The arrests have drawn renewed attention to the continuing problem of radical Islam in Catalonia, which has one of the largest per capita Muslim populations in Europe.

The cell — comprised of individuals from Algeria, Egypt, Iraq, Lebanon, Libya and Morocco — was broken up on January 15, when more than a hundred police officers raided five properties in Barcelona and the Catalan town of Igualada.

The arrests were part of a year-long counter-terrorism investigation called «Operation Alexandra,» launched in May 2017 after police received a tip that local jihadis were preparing an attack.

Catalan police, known as the Mossos d’Esquadra, said that the cell included five ringleaders who were in an «advanced process of radicalization with the aim to attack.» The cell adhered to the «doctrinal principles» of the Islamic State and were «significant consumers» of jihadi propaganda.

The newspaper El Mundo reported that the cell was divided into two parts: The first part consisted of a dozen members dedicated to robbery and theft, the proceeds of which financed the second part: namely the five ringleaders, who were committed to carrying out an attack.

Police said that the jihadis were known to have committed at least 369 robberies and thefts in and around Barcelona. In addition to theft, the cell members sustained themselves through drug trafficking and document fraud.

According to El Mundo, cell members were dedicated to stealing passports and other identity documents from tourists in Barcelona, Spain’s second-largest city and one of Europe’s most popular holiday destinations. The stolen documents were introduced into black market counterfeiting networks and then used by jihadis to travel throughout Europe.

On January 18, the Audiencia Nacional (National Court), a high court specialized in terrorism offenses, revealed that a Spanish citizen of Libyan origin nicknamed «Rabeh,» who was serving a sentence in the Catalan prison of Brians I for crimes relating to terrorism, had made contact with the cell, with the intention of carrying out an attack upon his release.

Seventy-two hours after their arrest, however, only three of the of the 18 jihadis remained in custody. Catalan media, citing police sources, reported that although all 18 cell members are radicalized, the 13 dedicated to theft and document fraud were released without even having appeared in court because it was not possible to prove beyond a reasonable doubt their intention to participate in an actual attack. They presumably have returned to their illicit livelihoods of pickpocketing, drug trafficking and document fraud. Two others were released on the condition that they promise not to leave Spain.

Barcelona has been on high alert since August 2017, when 22-year-old Younes Abouyaaqoub, a member of a 11-person jihadi cell based in Catalonia, drove a van into pedestrians on Las Ramblas, the city’s main tourist thoroughfare. He killed 15 people and wounded 130 others. A few hours later, five members the same cell drove their vehicle into pedestrians in the nearby coastal town of Cambrils. In that attack, a Spanish woman was killed, and several other people wounded.

On December 23, 2018, the U.S. State Department warned of the risk of a jihadi attack in Barcelona during the Christmas and New Year’s holidays. The security alert advised U.S. citizens to «exercise heightened caution around areas of vehicle movement, including buses, in the Las Ramblas area of Barcelona…. Terrorists may attack with little or no warning, targeting tourist locations, transportation hubs, and other public areas.»

Catalan police later said that they were searching for a 30-year-old Moroccan bus driver named Brahim Lmidi who allegedly was plotting to travel to Barcelona and «run over» people with a «bus or something similar.» Lmidi, who remains at large, is believed to be linked to a Salafist mosque in Vilanova i la Geltrú, a seaside town south of Barcelona.

A five-page American diplomatic cable, dated October 2, 2007, described the link between mass immigration to Catalonia and the rise of radical Islam in the region:

«Heavy immigration — both legal and illegal — from North Africa (Morocco, Tunisia, and Algeria) and Southeast Asia (Pakistan and Bangladesh) has made Catalonia a magnet for terrorist recruiters. … The Spanish National Police estimates that there may be upwards of 60,000 Pakistanis living in Barcelona and the surrounding area; the vast majority are male, unmarried or unaccompanied, and without legal documentation. There are even more such immigrants from North Africa. … They live on the edges of Spanish society, they do not speak the language, they are often unemployed, and they have very few places to practice their religion with dignity. … Individually, these circumstances would provide fertile ground for terrorist recruitment; taken together, the threat is clear….

«There is little doubt that the autonomous region of Catalonia has become a prime base of operations for terrorist activity. Spanish authorities tell us they fear the threat from these atomized immigrant communities prone to radicalism, but they have very little intelligence on or ability to penetrate these groups.»

In his book Jihadism: The Radical Islamic Threat to Catalonia, Catalan terrorism analyst Jofre Montoto estimated that at least 10% of the Muslims in Catalonia are «hardcore believers in the doctrine of jihadism.»

Many of Catalonia’s problems with radical Islam are self-inflicted. In an effort to promote Catalan nationalism and the Catalan language, Catalonian pro-independence parties have for decades promoted immigration from Arabic-speaking Muslim countries, in the belief that these immigrants (unlike those from Latin America) would learn the Catalan language rather than speak Spanish.

An intelligence report leaked to the Catalan newspaper La Vanguardia revealedthat half of the 98 Salafist mosques in Spain are located in Catalonia. The report showed that Catalan municipalities of Reus and Torredembarra (Tarragona), Vilanova i la Geltrú (Barcelona) and Salt (Girona) are centers for Salafism, a fundamentalist ideology that openly calls for replacing Western democracy with an Islamic government based on Sharia law. The report states:

«Salafist doctrine calls for a return to the origins of Islam with repeated messages that could be considered strongly contrary to a harmonious cultural integration with respect to equal rights between men and women….

«The Salafist religious centers detected in Catalonia are opposed to any reading of the Qur’an that is not the most rigorous… and at the same time are demanding a ‘purification’ of Muslim believers from foreign influences.

«This religious interference results in the demand for women to dress more conservatively and for the prohibition, especially for teenagers, of attending schools with male students. This supposes a deep break with the values ​​of individual freedom that are guaranteed by the laws of Europe. For men, as well as for women, the Salafist ideology could influence a radicalization and, in the end, become a problem of coexistence.»

Pierre Conesa, a former senior French Defense Ministry official and author of a half-dozen books about radical Islam, said that Catalonia and Salafism are now inseparable:

«Barcelona is a city that has long sheltered a form of radicalization. For a time, the city embraced the Muslim Brotherhood, then Tablighi Jamaat [a Sunni Islamic missionary movement advocating a rigorous and literal interpretation of Islam] and now the Salafists.

«There is a kind of radical immersion in Catalonia. If London has long been the home of Londonistan [an epicenter of Islamism], Barcelona is a Salafist city, where a nucleus of Salafist radicalization has been formed over time in the image of Molenbeek in Belgium, or Trappes in France.»