Stop Watching Us, a coalition of more than 100 public advocacy groups, organized the event calling for an end to mass surveillance conducted by the National Security Agency (NSA). The group brings together organizations ranging from the conservative and libertarian Young Americans for Liberty and the Competitive Enterprise Institute to Occupy Wall Street NYC, from Tea Party-aligned Freedom Works to progressive groups like Demand Progress and MoveOn.org. 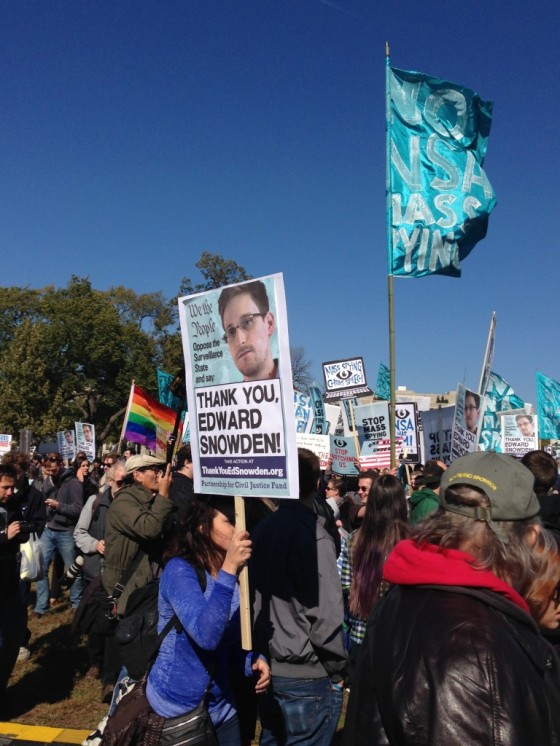 “In the last four months we’ve learned a lot about our government. We’ve learned that the government secretly built a system of pervasive surveillance. Today, no telephone call in America goes through without leaving a record with the NSA. Today, no Internet transaction enters or leaves America without passing through the NSA’s hands. Our representatives in Congress tell us this is not surveillance. They’re wrong,” Snowden said. “We’ve also learned this is not about party lines, and it’s definitely not about terrorism. It’s about power, control, and trust in government. About whether you have a voice in our democracy, whether decisions are made for you, rather than with you.”

The coalition gathered nearly 600,000 signatures in support of a letter to Congress asking that it “take immediate action to halt this surveillance and provide a full public accounting of the NSA’s and the FBI’s data collection programs.”

A provision sponsored by Reps. Justin Amash (R-Mich.) and John Conyers (D-Mich.) was narrowly defeated in July by a 205-217 vote. The amendment would have restricted the NSA surveillance program that collects the phone data of people in the U.S.

Amash was there to receive the boxes full of petitions from the coalition and to talk about his efforts to bring more accountability to the NSA. He said the amendment has scared the establishment of both parties and has prompted the NSA to fight back by urging Congress to pass the Cyber Intelligence Sharing and Protection Act (CISPA), which the agency believes will legalize its surveillance programs.

“We had the intelligence community against it, we had Republican and Democratic leadership against it, and despite all those obstacles we came very close to passing the amendment. And we’re gonna pass something to rein in the NSA,” he said.

Next week, Rep. Jim Sensenbrenner (R-Wis.) is expected to introduce a bill, known as the USA Freedom Act, which would create more transparency and accountability in the NSA. Sensenbrenner, who was the primary author of the Patriot Act, has also backed the Amash-Conyers amendment.