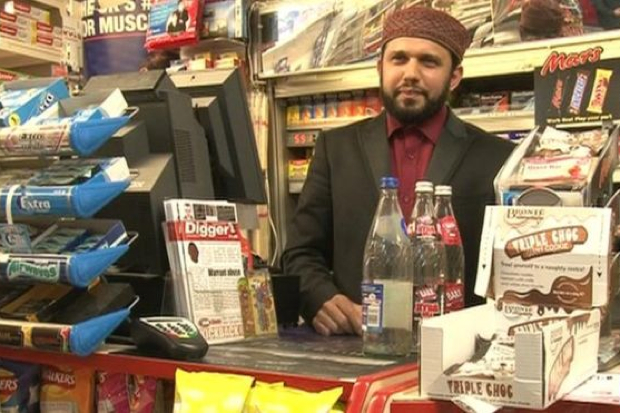 On Maundy Thursday a Muslim shopkeeper in Glasgow was brutally murdered. Forty-year-old Asad Shah was allegedly stabbed in the head with a kitchen knife and then stamped upon. Most of the UK press began by going big on this story and referring to it as an act of ‘religious hatred’, comfortably leaving readers with the distinct feeling that – post-Brussels – the Muslim shopkeeper must have been killed by an ‘Islamophobe’. Had that been the case, by now the press would be crawling over every view the killer had ever held and every Facebook connection he had ever made. They would be asking why he had done it and investigating every one of his associates.

But it then appeared that although the Asad Shah murder was being treated by police as ‘religiously motivated’ the suspected killer might in fact have been another Muslim and that, it was speculated, there might also have been a connection with a message on Facebook in which Mr Shah wished a very happy Easter to his ‘beloved Christian nation’ and suggesting people follow in ‘The Real Footstep of Beloved Holy Jesus Christ’.

Mr Shah was an Ahmadiyya (Ahmadi), a member of – against some stiff competition – one of the most persecuted sects within Islam. Persecution against them in Pakistan and elsewhere around the Islamic world is rife. Yet despite that (or perhaps for that very reason) they are probably the most peaceable and indeed admirable sect within Islam. Among other things, Ahmadiyya Muslims formally reject the concept of Jihad that other schools cling to. In Britain whenever there is a vaguely positive news story about Islam it almost invariably involves Ahmadi Muslims. Remember the bus adverts a few years back saying that Islam had ‘love for all, hatred for none’. That was paid for by Ahmadiyya Muslims. Remember the stories of a Muslim group not burning poppies but actually selling them for the Royal British Legion? Ahmadiyyas again.

If it should turn out that the killing of Mr Shah was related to the kind of Muslim Mr Shah was – and there is of course still a legal process to be followed and nothing should prejudge that – then it will be interesting to see if and how that affects the political discourse.  Last Friday it was reported that the Imam of the Grand Central Mosque in Glasgow (Scotland’s biggest mosque) had been caught posting messages on the net praising the Muslim extremist who murdered Pakistani governor Salman Taseer for opposing blasphemy laws. This is the mosque that First Minister Nicola Sturgeon went straight to after the Paris terror attacks in November. Did she ask whether the Imam was an Islamist? Perhaps she didn’t know how to ask. Like most people in our public life she is too ignorant to ask such questions and wouldn’t like the answers anyway.

After the death of Mr Shah, Ms Sturgeon went straight to a vigil in his memory. But neither she nor any other leading politician I am aware of has ever shown any sophistication in their thinking or pronouncements about such matters. So we hear the usual blandishments, but nobody will ask for instance which Muslim leaders in the UK stoke hatred of Ahmadiyya Muslims.

Either because they do not know, or because they do not care, nobody will ask Sadiq Khan about such issues. If they did then Sadiq Khan would doubtless express horror and then talk (as he always does) of the need to ‘root out’ all such hatred. But would anyone press on and ask whether the man most likely to be the next Mayor of London has ever ‘rooted out’ such hatred himself? Will anyone ask Sadiq Khan about the views of the religious leaders at the mosque he himself attends? I doubt it. They would know what to do were Sadiq Khan a follower of almost any other religion, but such is the illiteracy in this country about a religion people really ought to know far more about by now that they will be silent.

As it happens, the Imam of the mosque that Sadiq Khan himself attends in Tooting is one Suliman Gani. This is a man who has in the past openly acknowledged that he uses his position to agitate against Ahmadiyya Muslims. Indeed Sadiq Khan’s Imam has sat on a platform from which calls were made for Muslims to boycott shops owned by Ahmadi Muslims: Muslim shopkeepers, that is, like Mr Shah who was murdered last week.

As I say, nobody will ask about this, because almost nobody knows, or cares to know, or cares to hear the answers. They would care deeply about webs of association if the man arrested for Mr Shah’s murder turns out to be a non-Muslim. But there will be little to ask if it turns out he is a Muslim. That is how these things work in modern Britain, and that in a nutshell is why things are going to go so very wrong in the near future.