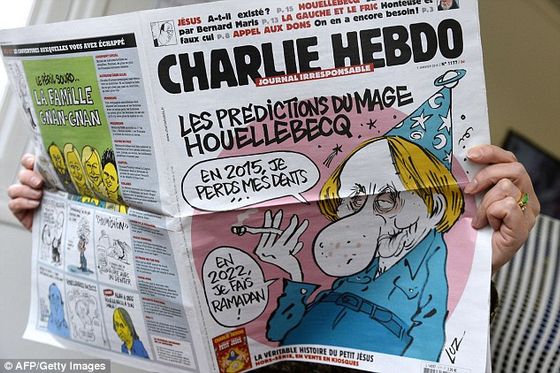 Paul Merrett, 57, owner of a newsagent in Presteigne, Wales, said a detective and a police community support officer arrived at his shop and started to question his wife about the people who bought them.

He said: ‘They wanted to know where we had got them from, and did we know who we had sold them to.

‘[My wife] said she wasn’t prepared to give any names. She thought we were in trouble for selling them originally, but they said we weren’t, and they just wanted to know who bought them.

‘We didn’t give them any details. It was all very strange. There were a couple of customers in here at the time, so it soon got around town.’

Earlier this week David Jones, 63, was told by his local shop in Beddau, Pontypridd, that an officer had asked for his name after he bought a copy for his 21-year-old son, who studied French at university.

He said: ‘I am astounded that this intrusion has occurred and wonder what right the police have to check up on what I and others are reading.

‘Surely their time would be better spent hunting deranged people who want to behead citizens on our streets.’

He said his newsagent told him that anther stockist in a nearby town had also been asked about Charlie Hebdo customers.

‘I cannot fathom out what link they think exists between a local person in a small town in South Wales, a satirical French magazine and some terrorists,’ he said.

‘Trust in the police is low and this type of official or unofficial snooping on private individuals will not improve the situation. They are acting like the Stasi.’