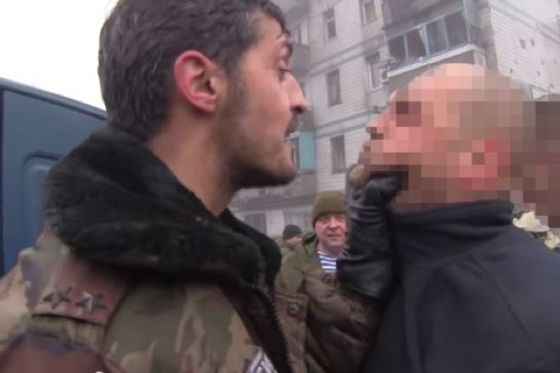 Speaking this weekend, Francois Hollande said, ‘If we don’t find a lasting peace agreement, we know perfectly well what the scenario will be. It has a name, it’s called war.’ The day before, Anders Fogh Rasmussen, the former head of Nato, said that Russia was likely to intervene in the Baltic states to test NATO’s shaky commitment to collective defence. ‘This is not about Ukraine. Putin wants to restore Russia to its former position as a great power.’

As telling as anything leaders are saying are the films Russian reporters have been broadcasting – I must warn you that there are age controls on these links for reasons that will become obvious. In the first, a separatist commander who goes by the nom de guerre of ‘Givi’, torments captives, taken during the recent siege of Donetsk airport. He waves a sword, and throws the captives out of a truck. He grins at his prisoners. ‘Do they recognise him?’ he asks. The stricken men know all about him and his ferocious reputation. He slices the chevrons off their jackets and stuffs them into their mouths. The captives are blindfolded, and taken to Donetsk, where women beat them. Reporters for Russian TV are visible throughout the video. In the second, dead captives are piled up along the side of the road. A correspondent for Russian state TV interviews the rebel commander. He says his men offered the Ukrainians the chance to surrender, but they refused.

Journalists have undertaken meticulous examinations of the footage to see whether it shows that the Russians are now shooting prisoners. Important though the argument is, as significant is the undisputed fact that Putin’s propagandists are now revelling in the death and humiliation of his enemies. They look as if they are preparing their viewers for an escalation of the war. And by showing Russians the corpses of the dead Ukrainian soldiers and pictures of abused captives, they are reassuring them that Putin will be victorious.

Two superb books about Russia came last week. I reviewed Red Notice, Bill Browder’s account of how he took on Russia’s corrupt security elite, which had stolen his company and murdered his friend Sergei Magnitsky, in the Daily Beast. Just as good is Peter Pomerantsev’s ‘Nothing Is True and Everything Is Possible‘. Pomerantsev worked as a journalist making reality programmes for Russian television. He writes with a novelist eye about the cultists, prostitutes, gangsters, victims of state crime and oligarchs he encounters. His book would be worth reading for his reporting of a decadent society where no one in authority believes in respecting the truth or the rule of law. But Pomerantsev is not just an English foreign correspondent bringing news from abroad. Because he worked in Russian television, he can describe how the Kremlin orders its propagandists to follow prescribed lines and themes from the inside. Pomerantsev recalls conversations with colleagues, who in their private lives and opinions are no different from those of liberal westerners. When he asks how they can reconcile their views and their work, they laugh at his naivety. ‘Everything is PR,’ they tell him. You must play the game, and if you don’t you’re an idiot who deserves all the suffering you will get.

The propaganda they produce is like nothing I have seen before. The old communists would pump out news on how the Soviet Union was the workers’ paradise and urge the peoples of the world to convert to Marxist-Leninism. The new Russian tyranny is post-modern in its public face. It barely bothers to sell life in Russia as an ideal for foreigners to envy and emulate. Instead, it tells us that all you hear and see is relative, a performance, a show: all that is except the lines handed down from the Kremlin. For reasons best known to themselves Ofcom officials have decided that the English-language version of RT (Russia Today) complies with Britain’s rules of impartiality in the Broadcasting Code. Watch it and you will see the trash of the West treated with deference. Neo-fascists, holocaust deniers, wild-eyed greens and, of course, George Galloway put aside their differences and unite under Kremlin patronage. They endorse conspiracy theory. In their words and by implication, they tell viewers they cannot believe anything they hear – not least accounts of the crimes of the Russian elite. Meanwhile, RT’s reporters obsessively cover the failings of the West – not always badly, I should say. They are journalistic prostitutes, but they almost accept that. They want to say, ‘yes we are whores but so are all those hypocrites who babble on about human rights and democracy. We are all prostitutes together and no one has the moral right to criticise the Kremlin.’

I had the pleasure of sharing a platform with Pomerantsev at the Dash Arts Centre in the East End of London last week. During the debate, he summed up Russian propaganda by saying it wanted to ‘buzz’ the airwaves, and create doubt and uncertainty. Afterwards, however, he took me aside and told me to look at the reports Russian TV was showing from the Donetsk region. He had never seen anything like the piles of corpses and the humiliation of captives before. Far from playing its old games with conspiracy theorists, it looked as if the new and decidedly unpost-modern line from the Kremlin was ‘prepare the viewers for war’. If he’s right, then a divided Europe, which spends as little as it can on its armed forces, will have to face the fact that Putin will try to humiliate it by sending undercover troops into the Nato countries on the Baltic. You might say he would be mad to do so. Russia has little to gain from provoking further sanctions, and risks uniting Nato around its core principle that an attack on one is an attack on all. But reason and Russia don’t go together. While Pomerantsev was talking, a passage from Bill Browder’s autobiography came back to me. Russia was like a prison yard, Browder wrote:

‘When someone is crossing the year coming for you, you have to kill him before he kills you. If you don’t, if you manage to survive, you will have to become someone’s bitch. That’s the calculus that every oligarch and every Russian politician goes through every day.’

Putin has to come keep coming at the West to show he is not a weakling and a coward, who could be taken out by a rival. And if he gets away with it, Europe will be his bitch.