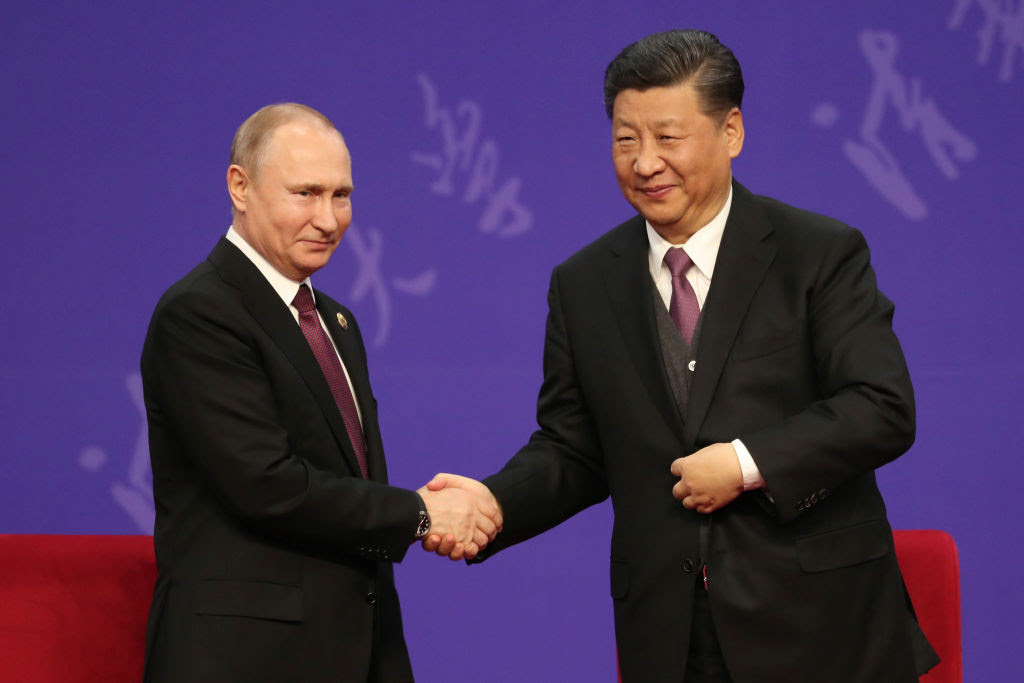 Imagine yourself sitting at a poker table with one opponent who fingers his dwindling stack of chips while glowering at you and daring you to bump the pot. Meanwhile, your other opponent with more chips sits quietly behind his cards while his paid spies behind your chair signal him the contents of your hand.

A national poll this spring showed a sharp divide between Democrats and Republicans over whether Russia or China is America’s greatest international adversary. Democrats, perhaps still seething from Russia’s clumsy efforts to sway the 2016 election to Donald Trump, see Vladimir Putin as a Bond movie villain and master manipulator. Republicans focused on commerce, cyber-security, and Asian ascension, look at emerging China as their greatest threat.

This is surprising, given the central importance of China to the COVID-19 pandemic, the most important news story in the United States in the past 18 months. The actions of the Beijing government since the earliest days of concern about the disease have shown in stark relief how a closed, authoritarian society tries to deny and shift blame for its misdeeds. How it seeks to co-opt international health agencies. How it tries to bribe foreigners to do its bidding. How it has infected more than just American bodies, but American society and its institutions at many levels.

This poll was conducted shortly before evidence of the lab-leak theory began to enter the mainstream and be taken seriously, even by those in the press who previously claimed to have «debunked» it. Almost no one in American politics, on the Left or Right, has been hailing the Chinese communist government for its efforts to stem the fourth deadly pathogen to come from its shores and devastate the rest of the world. The Chinese government concealed all information about how the virus originated, encouraging speculation they did so intentionally. According to Gordon Chang, they may even be preparing to do so again, only worse. Clearly, though, there are those who have lived through all of this, submitted to all of the measures necessary to defend themselves from this deadly virus, seen the deaths of friends, family members and acquaintances, and still do not think China is the world’s most critical problem.

By comparison, Russia’s crimes against the West, real and imagined, amount to a relative nuisance. Russian propagandists use their bot networks to seed conspiracy theories on social media. Russian government hackers, or government-allied hackers, penetrate with ransomware the computer systems of corporations that provide essential services such as gas and food. The Russian government militarily threatens its neighbors, former Soviet republics. Russia provides arms to America’s enemies in Iran and elsewhere.

These are all bad things, certainly, but not to the scale of incompetently (or worse) exporting a disease that has killed millions of people around the world, devastated the economies of the West, and changed almost overnight the fabric of how our societies function and will be able to interact in the foreseeable future.

To be clear, the poll’s results do not suggest there is a failure by Democrats to see China as a threat, nor that they perceive President Xi Jinping (65% unfavorable) much more favorably than the 71% unfavorable rating of the swaggering, KGB-trained Putin. Among both parties, both Putin and Xi trailed only North Korea’s tubby tyrant, Kim Jong Un (80% unfavorable) in the poll’s findings.

Foreign policy, however, is made towards nations, not individual leaders. In geo-political terms it asks: What is another country’s ability to help you, or harm you? Much goes into this discipline, including evaluation of trade relationships, military ambition and posture, the other country’s domestic situation, its relationships with our allies, and its standing in the world as a partner for international cooperation. In nearly all these areas, the menace of China looms far larger to 21st Century America than its chief 20th Century antagonist, Russia.

In the 1980s, no one would have suggested that Idi Amin, Fidel Castro, or Muamar Qaddafi was America’s greatest enemy. They were obnoxious sideshows, annoying tinpot dictators with a flair for the microphone, but not existential threats on the order of the Soviet Union. What this poll suggests is that threat assessment has somehow become a partisan issue, based on political grudges and perceptions that have little to do with a particular nation’s real capacity to damage American interests. The divide among Republicans and Democrats between China and Russia as our largest threat fails to account for a modern analysis of China’s power, influence, aggressiveness in action, and willingness to corrupt American political and cultural leaders. It should not be a partisan issue, no matter how obnoxious one nation’s current leader may be.

This all presents a challenge for the Biden administration, whose early moves do not suggest it views Russia as a larger threat than Beijing. Instead, administration officials have a communications problem with their political supporters about where they should direct their attention. And here is where the personalities of the two rivals’ leaders makes that harder but no less important. Putin loves to tweak America; Xi prefers quieter, more damaging forms of aggression.

The investigative work that the Government Accountability Institute (GAI) has been doing for many years follows the money that influences and corrupts American politicians, Republicans as well as Democrats. It is vital for American voters to understand that bribery is a key part of doing business for both China and Russia. Voters should carefully examine the foreign entanglements of the leaders they choose and look at their commercial ties and those of their family members and close associates to Chinese, Russian and other foreign actors. GAI works to present that information to them.

Mostly the focus has been on the downstream effects of these connections, how they influence policies and compromise ethics here. But the threads of this corruption wind into rope that is being pulled from one country in particular — China.

China’s influence on American life is vast and increasingly obvious. From its ability to muzzle NBA coaches or action-movie actors — even to control entire industries, such as the media, universities, Hollywood, and Big Tech — into silence about issues ranging from Hong Kong and Taiwan to Chinese government funding for «Confucius Institutes» on American university campuses, the Chinese have no equivalent. No matter how much he might like to, Vladimir Putin cannot threaten the balance sheets of huge American companies such as Apple and Microsoft; China could do it tomorrow.

Peter Schweizer, President of the Governmental Accountability Institute, is a Gatestone Institute Distinguished Senior Fellow and author of the best-selling books Profiles in Corruption, Secret Empires and Clinton Cash, among others.