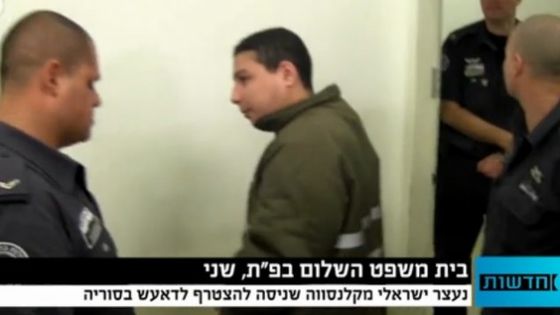 According to the indictment, Nasrallah, a resident of Qalansawe in central Israel, was asked by his Syrian interrogators to provide information on where wounded rebel forces were being hospitalized in Israel, according to the Ynet news website. He was also probed regarding an army base on the coastal highway, and told them what he knew about its location. His Syrian captors also pressed him for information on border control in the West Bank, and asked him if he had any Jewish friends or relatives who served in the IDF.

The Shin Bet and police believe that more than 30 Israeli Arabs have joined the Islamic State. In late November, Hamza Magamzeh, 22, was indicted for fighting with the jihadis.

In October, the family of Othman Abdelkayan, from the Bedouin Negev town of Hura, said he was killed in fighting in Syria. Abdelkayan, an Israeli doctor, left the country in May to join IS in Syria. He was slated to do a residency program at Soroka Medical Center in Beersheba in May.

The Shin Bet has barred several individuals, many of whom are students in their late teens and early twenties, from trying to leave the country for Syria and advocated for severe prison sentences for those who are caught upon return. “The departure of Arabs from Israel for Syria, and their stay there alongside global jihad elements, constitutes a series of threats,” the Shin Bet wrote in a report.