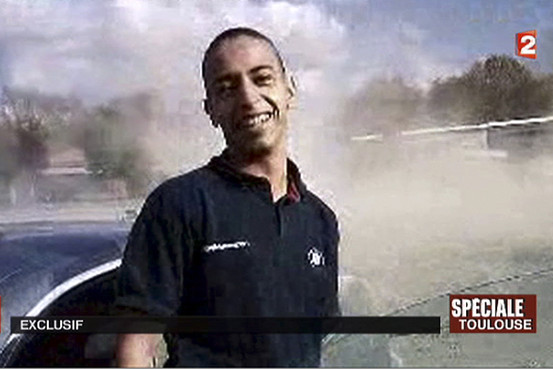 Speaking at a news conference Wednesday afternoon in Toulouse, Paris Prosecutor François Molins said Mr. Merah had traveled to Afghanistan and Pakistan twice in the past few years. The U.S. Army once sent him back to France, Mr. Molins said.

«During his first stay he was subjected to a random road control by the Afghan police, which led to him being handed over to the U.S. Army, which in turn put him on the first plane back to France,» Mr. Molins said.

A police official said Mr. Merah was in Afghanistan in 2010 where French authorities say they believe he trained in military camps and fought alongside Taliban groups.

Police surrounded a home in Toulouse where the alleged shooter, Mohamed Merah, was barricaded.

American officials in Afghanistan believe Mr. Merah was picked up by Kandahar police on one of his visits, U.S. military officials said. These officials said that while they are reviewing their records, they have no information about whether the U.S. detained him or transferred him to France.

Mr. Molins said the suspect told the police that he had planned other attacks, including one Wednesday «on a soldier he had already identified.» Mr. Molins didn’t give further information on the alleged plan.

A different picture of Mr. Merah emerged in the accounts of some people at the scene of the standoff. He was a respectful person who didn’t speak about politics or Islam and seemed more interested in motorcycles and disco dancing, according to a man who identified himself as a childhood friend. The man, who said he had seen Mr. Merah as recently as Sunday, said he was drawn to the scene out of disbelief at seeing the recent attacks linked to Mr. Merah.

Another friend, who identified himself as Kamel, said Mr. Merah had worked as an auto mechanic and had had «weird red hair at some point.»

Mr. Merah had a long police record, with 15 arrests during his youth for petty crimes, French officials said. He spent two years in prison between late 2007 and late 2009 after a court sentenced him for stealing an elderly woman’s handbag, according to Christian Etelin, the lawyer who defended him at the time. «He felt justice was harsher on him than on others,» Mr. Etelin said.

Last month, Mr. Merah was given a one-month prison sentence for causing a minor traffic accident while riding a motorcycle without a license, the lawyer said. Mr. Merah was due to appear before a local court in April to learn whether he would serve the sentence, Mr. Etelin said.

20.08 Merah’s lawyer, Marie-Christine Etelin, who has known the man since he was 17, expressed shock at his apparent fanaticism: «I had never thought that he would fall into such an ideological frenzy. The ideological side was a part [of himself] which he always kept secret from me, and without doubt from others.»

French Close In on Gunman