the Rochefoucauld Grail: Witness of the Legend of King Arthur 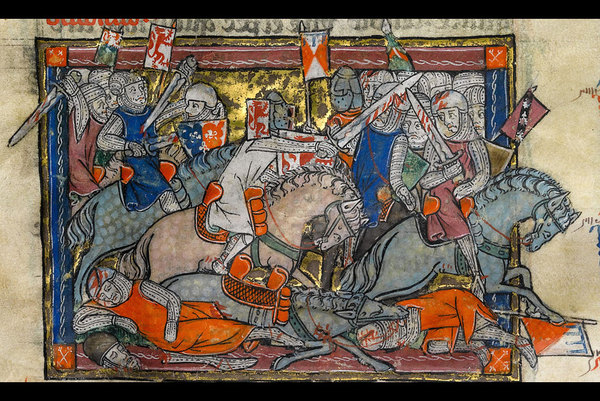 The Rochefoucauld Grail is from the 14th century, and on a scale which is as impressive as the text: some 200 cows would have been needed to produce the vellum sheets that make up the three monumental volumes, the whole embellished with some 107 jewel like illuminated illustrations – each one a work of art in its own right.

Dr Timothy Bolton, specialist in charge of the sale at Sotheby’s, said: “This is one of the principal manuscripts of the first significant medieval work of secular literature. It is a grand book, in a monumental format, with 107 miniatures, each a dazzling jewel of early gothic illumination. The subjects are almost entirely secular – a breathtakingly unusual thing at the time – with scenes of jousts, tournaments and battles, noble adventures and daring tests of strength and courage. The scenes often have a riotous energy, and often stretch beyond the boundaries of the picture frames, with lofty towers poking through the borders at the top, and figures tumbling out of the miniatures onto the blank page as they fall or scramble to escape their enemies.”
..
Written and illuminated in Flanders or Artois in the early-14th century (circa 1315-23), it was probably produced for Guy VII, Baron de Rochefoucauld, head of one of the leading aristocratic families of medieval France, and representative of King Philip V of France in Flanders.
..
The text was extremely popular in its time (there are myriad translations into other European languages), because it offered a model of spiritual chivalric behaviour, a guidebook for a Christian courtly society, through which the whole gamut of human emotions could be experienced. It shows friendship and love as well as lust, treachery and sin, while the characters struggle with ambition, achievement and crushing failure. These are the emotions and challenges that give life to stories such as those of King Arthur and the Knights of the Round Table, the Lady of the Lake, Sir Lancelot’s tragic infatuation with Arthur’s wife, Guinevere, and the tales of the wizard Merlin.