History, Precedent and Comey Statement Show that Trump Did Not Obstruct Justice 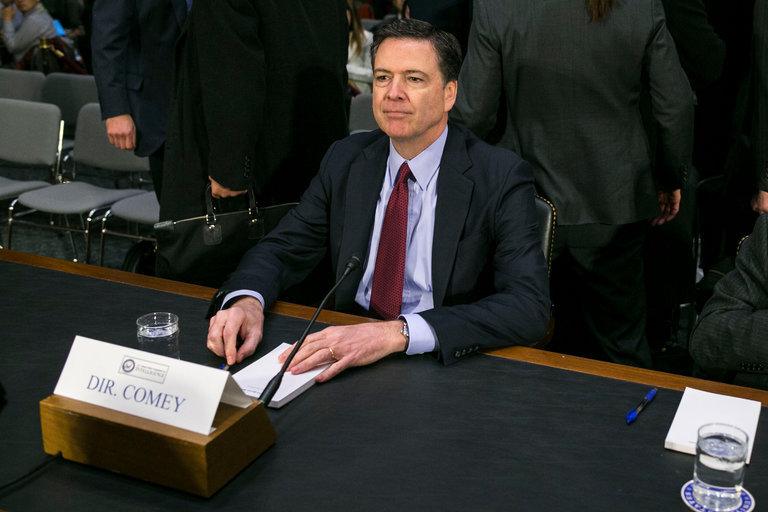 In 1992, then-President George H.W. Bush pardoned Caspar Weinberger and five other individuals who had been indicted or convicted in connection with the Iran-Contra arms deal. The special prosecutor, Lawrence Walsh, was furious, accusing Bush of stifling his ongoing investigation and suggesting that he may have done it to prevent Weinberger or the others from pointing the finger of blame at Bush himself. The New York Times also reported that the investigation might have pointed to Bush himself.

This is what Walsh said:

«The Iran-contra cover-up, which has continued for more than six years, has now been completed with the pardon of Caspar Weinberger. We will make a full report on our findings to Congress and the public describing the details and extent of this cover-up.»

It is true that among the impeachment charges levelled against President Nixon was one for obstructing justice, but Nixon committed the independent crime of instructing his aides to lie to the FBI, which is a violation of section 1001 of the federal criminal code.

It is against the background of this history and precedent that the statement of former FBI Director James must be considered. Comey himself acknowledged that,

«throughout history, some presidents have decided that because ‘problems’ come from Justice, they should try to hold the Department close. But blurring those boundaries ultimately makes the problems worse by undermining public trust in the institutions and their work.»

Comey has also acknowledged that the president had the constitutional authority to fire him for any or no cause. President Donald Trump also had the constitutional authority to order Comey to end the investigation of Flynn. He could have pardoned Flynn, as Bush pardoned Weinberger, thus ending the Flynn investigation, as Bush ended the Iran-Contra investigation. What Trump could not do is what Nixon did: direct his aides to lie to the FBI, or commit other independent crimes. There is no evidence that Trump did that.

With these factors in mind, let’s turn to the Comey statement.

Former FBI Director James Comey’s written statement, which was released in advance of his Thursday testimony before the Senate Intelligence Committee, does not provide evidence that President Trump committed obstruction of justice or any other crime. Indeed it strongly suggests that even under the broadest reasonable definition of obstruction, no such crime was committed.

The crucial conversation occurred in the Oval Office on February 14 between the President and the then director. According to Comey’s contemporaneous memo, the president expressed his opinion that General Flynn «is a good guy.» Comey replied: «He is a good guy.»

The President said the following: «I hope you can see your way clear to letting this thing go.»

Comey understood that to be a reference only to the Flynn investigation and not «the broader investigation into Russia or possible links to the campaign.»

Comey had already told the President that «we were not investigating him personally.»

Comey understood «the President to be requesting that we drop any investigation of Flynn in connection with false statements about his conversations with the Russian ambassador in December.»

Comey did not say he would «let this go,» and indeed he did not grant the president’s request to do so. Nor did Comey report this conversation to the attorney general or any other prosecutor. He was troubled by what he regarded as a breach of recent traditions of FBI independence from the White House, though he recognized that «throughout history, some presidents have decided that because ‘problems’ come from the Department of Justice, they should try to hold the Department close.»

That is an understatement.

Throughout American history — from Adams to Jefferson to Lincoln to Roosevelt to Kennedy to Obama — presidents have directed (not merely requested) the Justice Department to investigate, prosecute (or not prosecute) specific individuals or categories of individuals.

It is only recently that the tradition of an independent Justice Department and FBI has emerged. But traditions, even salutary ones, cannot form the basis of a criminal charge. It would be far better if our constitution provided for prosecutors who were not part of the executive branch, which is under the direction of the president.

In Great Britain, Israel and other democracies that respect the rule of law, the Director of Public Prosecution or the Attorney General are law enforcement officials who, by law, are independent of the Prime Minister.

But our constitution makes the Attorney General both the chief prosecutor and the chief political adviser to the president on matters of justice and law enforcement.

The president can, as a matter of constitutional law, direct the Attorney General, and his subordinate, the Director of the FBI, tell them what to do, whom to prosecute and whom not to prosecute. Indeed, the president has the constitutional authority to stop the investigation of any person by simply pardoning that person.

Assume, for argument’s sake, that the President had said the following to Comey: «You are no longer authorized to investigate Flynn because I have decided to pardon him.» Would that exercise of the president’s constitutional power to pardon constitute a criminal obstruction of justice? Of course not. Presidents do that all the time.

The first President Bush pardoned Caspar Weinberger, his Secretary of Defense, in the middle of an investigation that could have incriminated Bush. That was not an obstruction and neither would a pardon of Flynn have been a crime. A president cannot be charged with a crime for properly exercising his constitutional authority

For the same reason, President Trump cannot be charged with obstruction for firing Comey, as he had the constitutional authority to do.

The Comey statement suggests that one reason the President fired him was because of his refusal or failure to publicly announce that the FBI was not investigating Trump personally. Trump «repeatedly» told Comey to «get that fact out,» and he did not.

If that is true, it is certainly not an obstruction of justice.

Nor is it an obstruction of justice to ask for loyalty from the director of the FBI, who responded «you will get that (‘honest loyalty’) from me.»

Comey understood that he and the President may have understood that vague phrase — «honest loyalty» — differently. But no reasonable interpretation of those ambiguous words would give rise to a crime.   Many Trump opponents were hoping that the Comey statement would provide smoking guns.

Instead it has weakened an already weak case for obstruction of justice.

The statement may provide political ammunition to Trump opponents, but unless they are willing to stretch Comey’s words and take Trump’s out of context, and unless they are prepared to abandon important constitutional principles and civil liberties that protect us all, they should not be searching for ways to expand already elastic criminal statutes and shrink enduring constitutional safeguards in a dangerous and futile effort to criminalize political disagreements.

Today it is Trump. Yesterday it was Clinton. Tomorrow it could be you.

Alan Dershowitz, Felix Frankfurter Professor of Law, Emeritus, at Harvard Law School and author of «Taking the Stand: My Life in the Law» and «Electile Dysfunction: A Guide for the Unaroused Voter.»

History, Precedent and Comey Statement Show that Trump Did Not Obstruct Justice
by Alan M. Dershowitz
June 8, 2017 at 9:15 am
https://www.gatestoneinstitute.org/10497/trump-comey-obstruction-justice