An Assault on the Heart of the Canadian State

On Wednesday morning, shortly before 10am, Corporal Nathan Cirillo of the Argyll & Sutherland Highlanders was murdered at Canada’s National War Memorial in Ottawa. The killer was a recent Muslim convert, as was the killer of another Canadian soldier in St Jean-sur-Richelieu on Monday, and the killers of Drummer Lee Rigby in Woolwich in South London. In a detail almost too absurd, the Ottawa jihadist turned out to be the son of Susan Bibeau, the Deputy Chairperson of the Immigration Division of Canada’s Immigration and Refugee Board. Her (now ex-)husband was a «Libyan businessman».

Before 10am, I’d expected a day of light book-plugging, but instead I found myself on TV and radio for a series of far grimmer discussions, some of which I link to here:

In the first hour, when the identity of the shooter was still unknown, I talked with Shannon Bream and Jon Scott, who did a great job sifting and organizing the pieces of the puzzle as they came in until the full picture emerged.

A couple of hours later, I joined Neil Cavuto, who spoke to me immediately after the President of the United States had given his response. Mine was somewhat different.

As you can see, I got angrier as the day went on. On Sun News in Canada, I spoke with my old Ottawa pal Brian Lilley:

And finally I joined Sean Hannity, and among other things I mentioned the only good news of the day: Kevin Vickers is the Sergeant-at-Arms of the House of Commons, which is, most of the time, a ceremonial role – he’s the fellow who wears a goofy looking hat and carries the mace into the chamber each day. But he knew enough to understand, in a split second, that the ceremonial role had turned real and to take down the western world’s latest Soldier of Allah. Many more of us will need to recover that primal survival instinct in the years ahead. 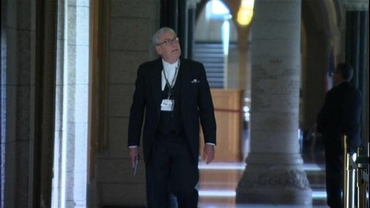 Kevin Vickers, Sergeant-at-Arms at the House of Commons, with pistol in hand moments after he shot the Muslim terrorist

The sub-title of my new book is «Don’t Say You Weren’t Warned». I have been writing for over a decade now about the west’s wannabe jihadists, often born and raised in Canada and America and Britain and Australia and Europe, some of them converts – or «reverts», as they call them. Throughout that period, the multiculti delusionists have insisted that Islam’s contribution to the diversity mosaic is no less positive than that of Poles or Italians. Now we have pure laine Quebeckers and Nigerian South Londoners converting to Islam because it’s the coolest gang on the planet. And one consequence of that is that a relaxed, open capital city will descend into the same panopticon security state as Washington. I love Ottawa – I know every yard of that stretch of Wellington Street connecting Parliament and the Cenotaph: Chateau Laurier is where I always stay when in town; not so long ago I walked past the war memorial with a senior Minister of the Crown and we talked about how simple and dignified and profoundly moving it was; and during my battles with the «human rights» commissions I had the honour of testifying to the House of Commons and strolling that same Centre Block corridor that that Allahu Akbar loon rampaged down today.

That security-lite Ottawa is gone, and that is a loss. But there will be others in the years ahead. Because the price of welcoming and incubating and growing Islam in the west is, ultimately, the loss of everything else.