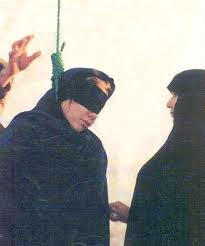 According to IHR’s sources, the woman was identified as Behjat (about 40 years old) and was convicted of murdering her husband about 10 years ago. She was sentenced to qisas (retribution in kind: an eye for an eye, a life for a life). Behjat’s execution had been postponed three times earlier.  Behjat’s father in law (father of the late husband who was murdered)  and her two daughters were present under the execution. One of the daughters was crying and calling for her mother, while the other daughter was asking for her execution. The execution was finally carried out by the victims father, Behjat’s father in law.

Behjat’s friend, Mohammad Jafari, who also was convicted of participation in the murder of Behjat’s husband, was hanged in July 2013.

Number of executions for murder charges (qisas) has dramatically raised in Iran. At least 148 of the 687 executions reported by IHR in 2013 were qisas cases. This number was eight times higher than the number f executions for qisas in 2012.

As of 12. May 2014, at least 100 of the 248 implemented death sentences in Iran have been based on murder charges (qisas). Meanwhile, at least 50 executions have been stopped as the families of the victims have pardoned the convict right before the execution.