The current turmoil is Iran is not a result of the alleged election fraud last June, but of thirty years of brutality humiliation and frustration. By Haideh Daragahi
In the bulk of e-mail messages filled with films, pictures, and articles from and about Iran I have chosen three pictures from the last two weeks to try to throw light on the cause and the content of the ongoing revolt in the country. All three are examples of the «citizen journalism» – which followed the ban on professional journalism and the expulsion of foreign reporters in the wake of the public protests after the alleged election fraud last June. 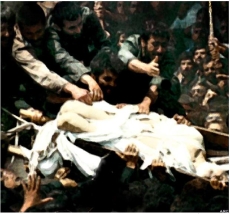 The first is from a public execution in the south eastern town of Sirjan. The crowd disrupt the procedure by attacking the guards and cutting the ropes from which the two victims, still alive, have been hanging. The severed rope is on the right-hand side of the picture and helping hands are reaching out to the prostrate, covered body of one of the victims that is being carried to safety.

Public executions by hanging or stoning have been part of the project of the Islamic Republic to normalise violence and brutalise the population. Since 1979 the implementation of Sharia law has reduced the concept of justice to retribution, or an-eye-for-an eye. Petty theft is punished by cutting off the hand of the thief, and anyone who causes the loss of an eye will have an eye gorged out in return. Murder is considered a familial rather than a social crime, and if the «owners of the blood,» i.e. the family of the victim, refuse to settle the case by taking blood money (the sum of which is set by the state) they are asked by the Sharia judge to kick the stool on which the condemned, with the noose around his neck, is standing.

The picture showing people rescuing hanging victims is a visible statement that there are groups of people who refuse to adjust to the cruelty of the law of retribution. 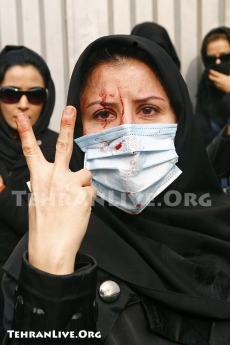 The second picture from December 27 in Tehran is that of a woman wearing a white mask as protection against tear gas. She has traces of blood on her face and holds her fingers to the camera in a defiant victory sign. Her posture is typical of millions of Iranian women who have populated the streets of major cities over the last six months. They have been at the forefront of protest demonstrations, confronting the riot police or diverting their attention from the men they are about to arrest. Their reaction can only be understood against the background of thirty years of humiliation and disenfranchisement. Every day they are insulted by sexual segregation and having to wear the veil in public. These women have been forced to accept having to live together with three other wives that the law allows their husbands to marry. Moreover, the man, according to Shiite law, is allowed to marry an indefinite number of «temporary» wives against payment, provided that a paid mullah is present to sanction the liaison. If the woman, however, chooses to love outside marriage she is liable to be stoned to death. She is considered marriageable at the age of nine, and if she decides to leave her husband she receives no alimony and loses custody of her children. She cannot travel or enter employment without the written consent of a male guardian or husband. If she is killed her blood money is worth half that of a man, her share of inheritance is half that of her brother, and her testimony counts for half that of a male witness. So it is hardly surprising when these women come to the conclusion that they have nothing to lose and everything to gain from living in a modern, secular state. 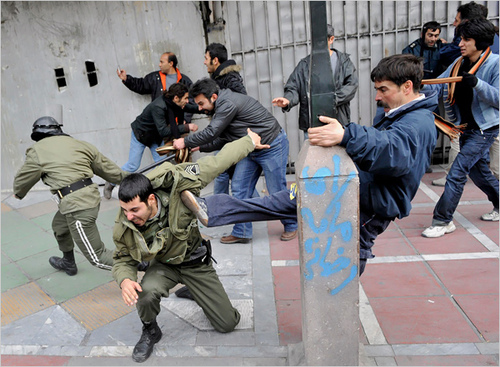 The third picture, also from December 27, shows a young man with a pole, about to stike a riot police who is trying to escape the crowd at his heels. His rage is the result of thirty years of political oppression, economic deprivation, and social and individual humiliation. The clerical elite and their allies have monopolised power, wealth, and the mass media, depriving the rest of the people not only of free political and artistic expression, but also of the right to express pesonal taste and make choices in minor matters of everyday life such as listening to music, chosing what to eat and drink, wear a T shirt with a message or a picture, or taking the hand of a girl you love while walking the street. Homosexuals are hanged, even as minors. Incomes have so dropped so low that there are tens of thousands of street children, hundreds of thousands of prostitutes, and millions of heroin and opium addicts. No wonder then that citizen journalists are willing to risk their lives.

Thirty years of superficial reporting of the Iranian situation by the Western press neglected the build-up to the current unrest. Even now, presenting the alleged election fraud as the cause of the revolt rather than an ignition key which released three decades of accumulated frustration, leaves people outside Iran quite perplexed. Election fraud, not uncommon even in Western democracies, cannot explain the outpouring of energy that we are witnessing now. Western politicians, including Swedish ones, alarmed by the prospect of radical political change in Iran that would inevitably affect the entire region and their own adjustments to the existing regimes, condone the superficial reporting and refuse to do more than condemn human rights violations of the past six months. condemnation of human rights over the last six months. In this they find themselves in the company of the reformist faction of the Iranian power structure that lost the June election.

The surprise element in the Iranian situation defies the wisdom of Western media, trained to focus on the power structure at the top. The extreme form of control that the Islamic Republic has tried to impose has boomeranged in a way that this type of reporting finds difficult to explain. The decentralised form of the current resistance seems to follow the example set by the women’s movement over the last three years. Their network form of organisation and its communication via the internet paved the way for this diffuse form of political activity.

There is no way of predicting the outcome of the ongoing popular movement. However, any possible compromise at the top, bringing one or the other faction of the existing system to power, even with the blessing of the West, will have to grapple with the minimum demand of the separation of religion and state as reflected in the slogans of various groups of demonstrators. No government with a constitution based on Sharia law can get round such a demand.

Haideh Daragahi was a professor of English Literature at Tehran University when Khomeini took power. She has lived in Sweden since 1984 as an academic, women’s activist and journalist.