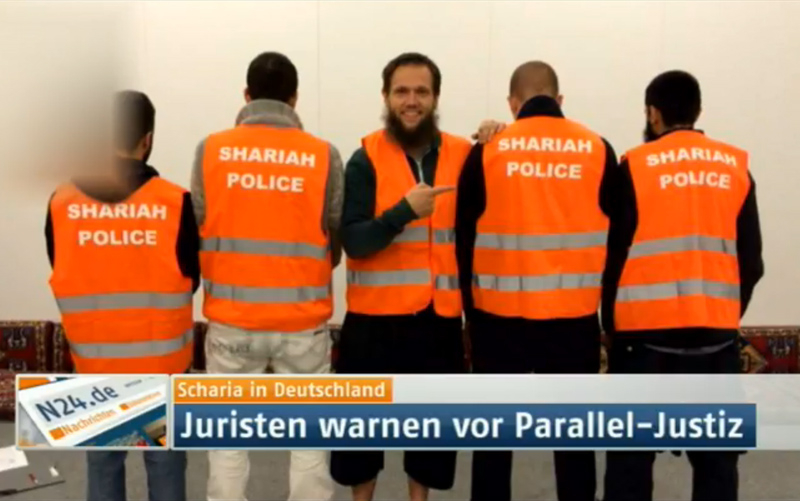 A German court has ruled that seven Islamists who formed a vigilante patrol to enforce Sharia law on the streets of Wuppertal did not break German law and were simply exercising their right to free speech.

The ruling, which effectively legitimizes Sharia law in Germany, is one of a growing number of instances in which German courts are — wittingly or unwittingly — promoting the establishment of a parallel Islamic legal system in the country.

The self-appointed «Sharia Police» sparked public outrage in September 2014, when they distributed yellow leaflets which established a «Sharia-controlled zone» in the Elberfeld district of Wuppertal. The men urged both Muslim and non-Muslim passersby to attend mosques and to refrain from alcohol, cigarettes, drugs, gambling, music, pornography and prostitution.

The vigilantes are followers of Salafism, a virulently anti-Western ideology that openly seeks to replace democracy in Germany (and elsewhere) with an Islamic government based on Sharia law.

Salafist ideology posits that Sharia law is superior to secular, common law because it emanates from Allah, the only legitimate lawgiver, and thus is legally binding eternally for all of humanity. According to the Salafist worldview, democracy is an effort to elevate the will of humans above the will of Allah, and is therefore a form of idolatry that must be rejected. In other words, Sharia law and democracy are incompatible.

Wuppertal Mayor Peter Jung said he hoped the police would take a hard line against the Islamists: «The intention of these people is to provoke and intimidate and force their ideology upon others. We will not allow this.»

Wuppertal Police Chief Birgitta Radermacher said the «pseudo police» represented a threat to the rule of law and that only police appointed and employed by the state have the legitimate right to act as police in Germany. She added:

«The monopoly of power lies exclusively with the State. Behavior that intimidates, threatens or provokes will not be tolerated. These ‘Sharia Police’ are not legitimate. Call 110 [police] when you meet these people.»

Wuppertal’s public prosecutor, Wolf-Tilman Baumert, argued that the men, who wore orange vests emblazoned with the words «SHARIAH POLICE,» had violated a law that bans wearing uniforms at public rallies. The law, which especially prohibits uniforms that express political views, was originally designed to prevent neo-Nazi groups from parading in public. According to Baumert, the vests were illegal because they had a «deliberate, intimidating and militant» effect.

On November 21, 2016, however, the Wuppertal District Court ruled that the vests technically were not uniforms, and in any event did not pose a threat. The court said that witnesses and passersby could not possibly have felt intimidated by the men, and that prosecuting them would infringe on their freedom of expression. The «politically correct» decision, which may be appealed, effectively authorizes the Sharia Police to continue enforcing Islamic law in Wuppertal.

German courts are increasingly deferring to Islamic law because either the plaintiffs or the defendants are Muslim. Critics say the cases — especially those in which German law has taken a back seat to Sharia law — reflect a dangerous encroachment of Islamic law into the German legal system.

In May 2016, for example, an appeals court in Bamberg recognized the marriage of a 15-year-old Syrian girl to her 21-year-old cousin. The court ruled that the marriage was valid because it was contracted in Syria, where such marriages are allowed according to Sharia law, which does not set any age limit to marriage. The ruling effectively legalized Sharia child marriages in Germany.

The case came about after the couple arrived at a refugee shelter in Aschaffenburg in August 2015. The Youth Welfare Office (Jugendamt) refused to recognize their marriage and separated the girl from her husband. The couple filed a lawsuit and a family court ruled in favor of the Youth Welfare Office, which claimed to be the girl’s legal guardian.

The court in Bamberg overturned that ruling. It determined that, according to Sharia law, the marriage is valid because it has already been consummated, and therefore the Youth Welfare Office has no legal authority to separate the couple.

The ruling — which was described as a «crash course in Syrian Islamic marriage law» — ignited a firestorm of criticism. Some accused the court in Bamberg of applying Sharia law over German law to legalize a practice that is banned in Germany.

Critics of the ruling pointed to Article 6 of the Introductory Act to the German Civil Code (Einführungsgesetz zum Bürgerlichen Gesetzbuche, EGBGB), which states:

This stipulation is routinely ignored, however, apparently in the interests of political correctness and multiculturalism. Indeed, Sharia law has been encroaching into the German justice system virtually unchecked for nearly two decades. Some examples include:

In an interview with Spiegel Online, Islam expert Mathias Rohe said that the existence of parallel legal structures in Germany is an «expression of globalization.» He added: «We apply Islamic law just as we do French law.»

A growing number of Muslims in Germany are consciously bypassing German courts altogether and instead are adjudicating their disputes in informal Sharia courts, which are proliferating across the country. According to one estimate, some 500 Sharia judges are now regulating civil disputes between Muslims in Germany — a development that points to the establishment of a parallel Islamic justice system in the country.

A major reason for the growth in Sharia courts is that Germany does not recognize polygamy or marriages involving minors.

The German Interior Ministry, responding to a Freedom of Information Act request, recently revealed that 1,475 married children are known to be living in Germany as of July 31, 2016 — including 361 children who are under the age of 14. The true number of child marriages in Germany is believed to be much higher than the official statistics suggest, because many are being concealed.

Polygamy, although illegal under German law, is commonplace among Muslims in all major German cities. In Berlin, for example, it is estimated that fully one-third of the Muslim men living in the Neukölln district of the city have two or more wives.

According to an exposé broadcast by RTL, one of Germany’s leading media companies, Muslim men residing in Germany routinely take advantage of the social welfare system by bringing two, three or four women from across the Muslim world to Germany, and then marrying them in the presence of a Muslim cleric. Once in Germany, the women request social welfare benefits, including the cost of a separate home for themselves and for their children, on the claim of being a «single parent with children.»

Although the welfare fraud committed by Muslim immigrants is an «open secret» costing German taxpayers millions of euros each year, government agencies are reluctant to take action due to political correctness, according to RTL.

Chancellor Angela Merkel once declared that Muslims must obey the constitution and not Sharia law if they want to live in Germany. More recently, Justice Minister Heiko Maas said:

«No one who comes here has the right to put his cultural values or religious beliefs above our law. Everyone must abide by the law, no matter whether they have grown up here or have only just arrived.»

In practice, however, German leaders have tolerated a parallel Islamic justice system, one which allows Muslims to take the law into their own hands, often with tragic consequences.

On November 20, 2016, for example, a 38-year-old German-Kurdish man in Lower Saxony tied one end of a rope to the back of his car and the other end around the neck of his ex-wife. He then dragged the woman through the streets of Hameln. The woman, who survived, remains in critical condition.

The crime, which has drawn renewed attention to the problem of Sharia justice in Germany, has alarmed some members of the political and media establishment.

Wolfgang Bosbach, of the ruling Christian Democratic Union (CDU), said: «Even if some people refuse to admit it, a parallel justice system has established itself in Germany. This act shows a clear rejection of our values and legal order.»

On November 23, Bild, the largest-circulation newspaper in Germany, warned that the country was «capitulating to Islamic law.» In a special «Sharia Report» it stated:

«The 2013 coalition agreement between the CDU and the Social Democrats promised: ‘We want to strengthen the state’s legal monopoly. We will not tolerate illegal parallel justice.’ But nothing has happened.»

«Even if we still refuse to believe it: Parts of Germany are ruled by Islamic law! Polygamy, child marriages, Sharia judges — for far too long the German rule of law has not been enforced. Many politicians dreamed of multiculturalism….

«If the rule of law fails to establish its authority and demand respect for itself, then it can immediately declare its bankruptcy.»