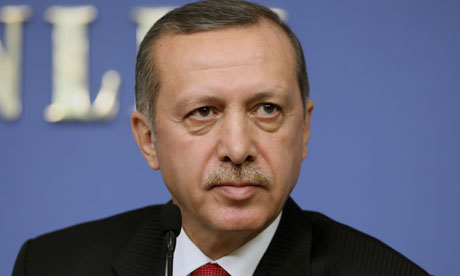 In November 1998, the Institute for Jewish Policy Research released its annual report on current trends in anti-Semitism across the world. In the section for Turkey, the journal quoted the then-mayor of Istanbul, Recep Tayyip Erdogan, in June 1997, at a meeting organized by the municipality to celebrate the city’s conquest by the Ottoman Turks, remarking: «The Jews have begun to crush the Muslims of Palestine, in the name of Zionism,» the mayor said, «Today, the image of the Jews is no different from that of the Nazis.»

Erdogan later became, and still is, the Prime Minister of Turkey, a man whom President Obama describes as a personal friend, in a country that is a member of NATO, and head of a government that is regarded as moderate, and, as the London Times recently reflected, an example of how Islamism and democracy do not have to be mutually exclusive.

Birikim, a Turkish socialist culture magazine, also attributes the quote to Erdogan. A search through Western newspaper records, however, shows no mention at all of these comments.

That remark is not the only example of Erdogan’s hostility in this regard. Turkish newspaper Yeni Safak has reported Erdogan commenting that the media does not fully report Israel’s «murder of innocent children» because the «world’s media is under the control of Israel, and this needs to be emphasised.»

In 2009 another Turkish newspaper, Taraf, reported that Erdogan, while attending the opening of a university, stated, «wherever Jews settle, they make money. They are not property owners, as being tenants suits them best. On the other hand, whatever we have or do not have, we will invest in our houses.»

In early January, when the Middle East Media Research Institute (MEMRI) produced a video of Morsi describing Zionists as «the descendants of apes and pigs,» it took almost two weeks and a barrage of criticism for a leading newspaper, the New York Times, finally to report the comments. The eventual action led to worldwide denunciation of Morsi’s remarks and even a condemnatory statement from the White House. Now that we know that Erdogan, Prime Minister of a country considered to be a leading ally of the West, made comments similar to Morsi’s, will the media do its best to avoid reporting those, too?

Erdogan: «The Image of the Jews Is No Different from that of the Nazis»