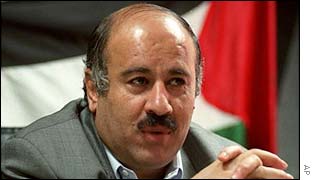 Jibril Rajoub, the head of the Preventative Security service in the West Bank, is widely seen as one of the leading contenders to succeed Palestinian leader Yasser Arafat.

Mr Rajoub is viewed as a pragmatist and has in the past – mainly in 1996 and 97 – ordered his forces to clamp down on the Islamic militants of Hamas and Islamic Jihad to stop them attacking Israel.

On the other hand, he says that one result of the current intifada has been to halt the Israeli settlement expansion programme.

By causing general security to deteriorate and harassing the Israeli army and settlers, he argues, some settlers have been obliged to reconsider whether they want to live in the occupied territories.

Born in Dura near Hebron in the West Bank in 1953, Mr Rajoub is a long-term member of Fatah, Yasser Arafat’s political organisation.

He was sentenced by Israel to life imprisonment in 1970 for throwing a grenade at a convoy of Israeli soldiers. He is reported to have learnt Hebrew in jail and speaks English.

Israel expelled Mr Rajoub to Lebanon in 1988 for activities in the first intifada.

In May 2001 three Israeli shells hit Mr Rajoub’s home but he escaped.

Many Palestinians complain that Mr Rajoub and his Gazan counterpart Mohammed Dahlan are used by Yasser Arafat to quash dissent and harass political opponents.

Rajoub opposes Palestinian attacks inside Israel as counter productive
Numerous organisations and newspapers that have criticised the Palestinian leader have received a visit form the men of the Preventative Security Force.

Mr Rajoub commands several thousand men, recruited almost entirely from the occupied territories and many of whom were involved in the first Palestinian intifada of 1987 to 1993.

As a candidate for Palestinian leadership, Mr Rajoub would represent the continuation of the status quo.

Despite being of a younger generation than Mr Arafat, he essentially argues for the survival of the Palestinian Authority (PA) as the best organisation to represent Palestinian interests.

Mr Rajoub is therefore partly in conflict with the Islamic militants and the younger more radical leaders of the Tanzim and al-Aqsa Brigades who are promising that the intifada will not end until Palestinian independence is declared. They are less concerned with preserving the PA.

Mr Rajoub may not himself be the front runner to succeed Yasser Arafat. He is believed to back Mahmoud Abbas (also known as Abu Mazen) for the succession.

Mr Abbas is a founder member of the Fatah movement – Mr Arafat’s de facto deputy. He is approved of by the US and has a good working relationship with some members of the Israeli Labor party.