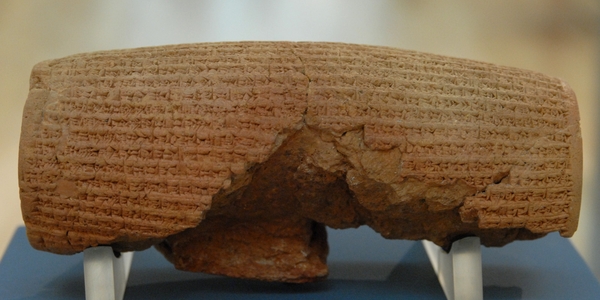 The Cyrus cylinder, also known as the Cyrus the Great cylinder, is a document issued by the Persian ruler Cyrus the Great in the form of a clay cylinder inscribed in Akkadian cuneiform script.[1] The cylinder was created following the Persian conquest of Babylon in 539 BC, when Cyrus overthrew the Babylonian king Nabonidus and replaced him as ruler, ending the Neo-Babylonian Empire. The text of the cylinder denounces Nabonidus as impious and portrays the victorious Cyrus as pleasing to the chief Babylonian god Marduk. It goes on to describe how Cyrus had improved the lives of the citizens of Babylonia, repatriated displaced peoples and restored temples and cult sanctuaries.

The cylinder was discovered in 1879 by the Assyro-British archaeologist Hormuzd Rassam in the foundations of the Esagila, the main temple of Babylon, where it had been placed as a foundation deposit. It is today kept in the British Museum in London.[1] There have been reports of attempts by the directors of the British Museum and the National Museum of Iran in Tehran to arrange a loan of the Cyrus Cylinder to be temporarily displayed in the National Museum of Iran for a special exhibition.[2]

According to the British Museum, the cylinder «reflects a long tradition in Mesopotamia where, from as early as the third millennium BC, kings began their reigns with declarations of reforms.»[3] It is composed in a form that broadly matches long-standing Babylonian styles and themes, although the use of the first person marks a striking departure from this pattern.[4] The cylinder may be seen as an example of Cyrus seeking the loyalty of his new Babylonian subjects by stressing his legitimacy as king, and showing his respect for the religious and political traditions of Babylonia. It has been regarded for over a century as an instrument of ancient Mesopotamian propaganda.[5][6] In the early 1970s, the Shah of Iran adopted it as a symbol of his reign and in celebrating 2,500 years of Iranian monarchy, asserting that it was «the first human rights charter in history».[5][7][8] The cylinder has also attracted attention in the context of the repatriation of the Jews to Jerusalem following their Babylonian captivity[9]; it has generally been viewed as corroboration of the Biblical account in the Book of Ezra (see: Ezra 1.1-6, 6.1-5; Isaiah 44.23-45.8; 2 Chronicles 36.22-23).