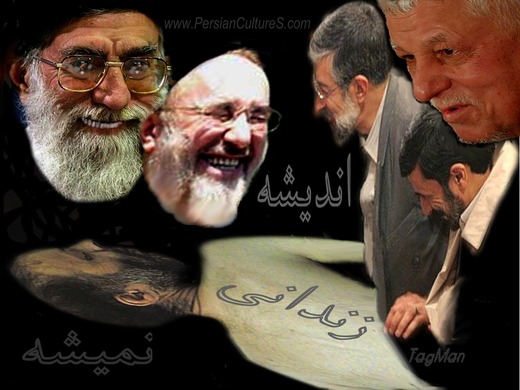 Ahmadinejad deserves little credit for whatever progress Iran may have witnessed under his presidency, but nor does he deserve to be singled out as considerably worse than his predecessors or his peers. And yet antagonism toward him has so blinded observers that when other conservatives step down or are set aside, they instantly are viewed as better fellows than he. Ali Larijani was missed as soon as he resigned as chief negotiator on nuclear issues, in late 2007, even though during the decade that he headed the state broadcasting organization, he repeatedly broadcast television programs that sought to tarnish the reputation of dissidents and reformists through half-truths, fabrications, and outright lies. Similarly, when Yahya Rahim Safavi was replaced as the commander of the Revolutionary Guards, reformists started muttering that his successor was a very dangerous man. Apparently, they had forgotten that Safavi once said that his job consisted of pouring water into their «snake holes.»

But such censorship also took place during the terms of Rafsanjani and Khatami. For example, Khatami once prohibited the deputies of the sixth Majlis (2000-2004) from reading a letter criticizing Khamenei’s position on the nuclear question at an open session of parliament and the newspapers from publishing it.

In other areas, the situation has improved modestly. The first decade after the revolution was the Islamic Republic’s worst in terms of violent repression. Political prisoners were systematically tortured; in the summer of 1988, several thousand were executed on Khomeini’s orders — and on Khamenei’s watch as president. Under Rafsanjani, the Intelligence and Security Ministry routinely assassinated opposition figures in Iran and abroad, and the torture of political prisoners continued unabated. Soon after Khatami was elected, the Intelligence and Security Ministry killed a number of dissidents, and although the human rights situation improved because of greater press freedom and increased discussion of human rights abuses, those of us who wrote about these continuing injustices were thrown in jail. Detention conditions remain deplorable today — over the past year alone, a young female doctor and a Kurdish student have died in custody — but they have generally improved compared to the 1980s. This progress has had little to do with Ahmadinejad, however. If instances of political repression have decreased over the past three decades, it is largely because notions of democracy and human rights have taken root among the Iranian people and thus it has become much more difficult for the government to commit crimes.

Judging by the freedom of Iran’s elections, there has been little progress. Whether they are for the post of president, the unicameral parliament (known as the Majlis), or local councils, elections in Iran are rigged pseudoelections. Candidates must pledge in writing that they are committed, in theory and in practice, to the Iranian constitution, Islam, the absolute sovereignty of the supreme leader, and the late Khomeini. Many left-wing members of parliament were banned from running for reelection in the 1992 contest, when Rafsanjani was president. In the Majlis elections of February 2004, under President Khatami, about 190 of parliament’s 290 seats were earmarked in advance for specific conservative candidates and about 43 percent of the registered candidates (3,500 of 8,172) were disqualified — this was «a parliamentary coup,» according to Mostafa Tajzadeh, a reformist and the deputy interior minister at the time. The presidential election that Ahmadinejad won, in 2005, was so rigged that several top officials resigned in protest. Matters have not improved much since. In the Majlis elections earlier this year, 158 seats were earmarked (leaving only 132 spots open for contest) and about 26 percent of the registered candidates (2,000 of 7,597) were disqualified. The reformist group Mujahideen of the Islamic Revolution Organization decried these «made-to-order» elections as an attempt by the leadership to fashion an obedient Majlis.

Formally or not, the executive, legislative, and judicial branches of government all operate under the absolute sovereignty of the supreme leader; Khamenei is the head of state, the commander in chief, and the top ideologue. He also reaches into economic, religious, and cultural affairs through various government councils and organs of repression, such as the Revolutionary Guards, whose commander he himself appoints.

A major lever of power is the supreme leader’s ability to appoint and dismiss senior government officials. President Rafsanjani allowed Khamenei to choose his culture minister, interior minister, intelligence minister, higher-education minister, and foreign minister. (Khamenei has always been particularly interested in those ministries as well as in foreign affairs.) From the time of his appointment in 1989, Khamenei has limited his appointees’ terms and regularly dislodged the occupants of sensitive military and police posts. It matters little that Khamenei is not likely to sack Ahmadinejad; the point is that he can.

A major lever of power is the supreme leader’s ability to appoint and dismiss senior government officials. President Rafsanjani allowed Khamenei to choose his culture minister, interior minister, intelligence minister, higher-education minister, and foreign minister. (Khamenei has always been particularly interested in those ministries as well as in foreign affairs.) From the time of his appointment in 1989, Khamenei has limited his appointees’ terms and regularly dislodged the occupants of sensitive military and police posts. It matters little that Khamenei is not likely to sack Ahmadinejad; the point is that he can.

Similarly, Khamenei routinely influences the media through the policies of the Supreme Council of the Cultural Revolution, all of whose current members he personally appointed. He also makes his political preferences widely known, expecting everyone to work toward satisfying them. In 1998, Khamenei lavished the conservative Association of Muslim Journalists with praise: «I thank you all. You are the ones who defend Islam’s borders on the frontline of the battle against the West’s cultural invasion. You all have machine guns in your hands. But I’d like to extend a special thanks to Kayhan newspaper. Kayhan not only has a machine gun in its hand, it is also a very capable sniper.»

At his first meeting with cabinet ministers as supreme leader, in 1989, Khamenei expounded a «theory of terror» that has since defined his approach to internal security issues. Based on his interpretation of the Koran and the early history of Islam, he said at this meeting, «The majority of the people in the state are silent. A selfless group of individuals can make the state endure by using terror.» This theory has served as the justification for assassinating dissidents in Iran and abroad and otherwise silencing anyone who has posed an ideological challenge to the regime.

He (Khomeini) also established a parallel military force, the Revolutionary Guards, to protect the revolution and ordered the creation of the Basij, an all-volunteer paramilitary organization to help with law enforcement, the policing of moral issues, and the provision of social services. The Revolutionary Guards developed air, naval, and ground capabilities in parallel to those of the conventional army, and they assumed command over the Basij.

Khamenei, on the other hand, lacks such credentials — so much so that the conservative Association of Seminary Teachers, in Qom, refused to endorse him as a senior cleric until 1992, when the Revolutionary Guards surrounded its headquarters.

The military’s involvement in the economy has also increased significantly and is now officially sanctioned. Many long-standing disputes over the Revolutionary Guards’ allegedly illegal economic activities have been whitewashed. Members of the force have been granted oil contracts or have made major profits under questionable real estate deals. Since the 1990s, the Revolutionary Guards, the regular armed forces, and law enforcement officers have financed large-scale construction projects in the residential suburbs in northern Tehran. Before Ahmadinejad was elected president, the local authorities had refrained from issuing permits recognizing the buildings’ completions, which made it impossible for the owners to secure legal deeds. But after Ahmadinejad came to power, and conservatives replaced reformists on Tehran’s city council, the municipalities awarded permits for all the relevant buildings, and those involved have made huge profits.

Still, following the attacks of September 11, 2001, Tehran cooperated with Washington. Welcoming the fall of the Taliban, a longtime enemy because of their extremist Sunni views and their attacks on Afghan Shiites and Iranian diplomats in Afghanistan, Tehran helped the U.S.-led coalition form a new Afghan government at the Bonn conference. Even after Bush’s famous «axis of evil» speech and the U.S. invasion of Iraq in the spring of 2003, Tehran made a conciliatory gesture. After coordinating the move with Khamenei, Kharrazi, then the Iranian ambassador in Paris, delivered an unsigned letter to the Swiss embassy in Tehran suggesting that the Iranian government would contemplate recognizing Israel, reining in the region’s radical organizations, and proposing a security plan for the Persian Gulf. But the Bush administration, drunk on its quick military victory in Iraq, disregarded the offer. All sections of the Iranian regime, including Khatami and the reformists, interpreted the brushoff to mean that after Iraq, it was Iran’s turn to be invaded by the United States.

Wise or unwise, Tehran’s policy of meddling in the business of its neighbors has very little to do with Ahmadinejad; this has always been the approach favored by the supreme leader. Iranian officials have said, for example, that the 33-day war between Hezbollah and Israel during the summer of 2006 was conducted under Khamenei’s guidance. Larijani, once Iran’s chief nuclear negotiator and a former secretary of the SNSC, described the conflict as «a very sweet and astounding moment to me» and attributed Hezbollah’s victory to Khamenei: «The victory is indebted to a strategic piece of guidance by the eminent leader of the Islamic Revolution, His Eminence Ayatollah Khamenei (may God protect him), after the first week of the fighting.»