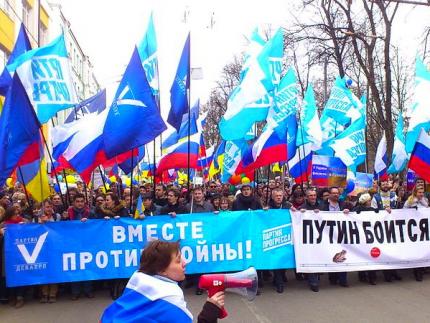 On Saturday, between 50,000 and 80,000 people marched through the streets and boulevards of downtown Moscow to protest Vladimir Putin’s aggression against Ukraine and his illegal annexation of Crimea. Carrying Russian and Ukrainian flags and posters reading “For your freedom and ours,” “For Ukraine and Russia without Putin,” “Ukraine, forgive us,” and “Russia is us, not Putin!” the participants of the country’s largest opposition demonstration since the peak of the protest movement in 2011–2012 marched from Pushkin Square to Andrei Sakharov Avenue.

In Kyiv, members of the Ukrainian Parliament began their session with a standing ovation to the tens of thousands of Muscovites who went to the streets to say “No” to Putin’s actions. “We have no right to behave in this way toward a friendly nation,” opposition leader Boris Nemtsov said in Moscow, holding a Russian flag and addressing a human sea of protesters. “It is ignoble. It is petulant. It is harmful to Russia.” “I was in Kyiv a week ago, I walked on the Maidan, and I did not see any fascists or Banderovites there,” Nemtsov added, in reference to the relentless Kremlin propaganda that claims that Ukraine has been seized by “fascists,” and that the Russian government must therefore intervene to “protect Russians in Ukraine.” Saturday’s antiwar demonstration itself was depicted on Russian state TV as “a march against the reunification of Crimea with Russia,” whose participants “chanted Banderovite slogans.”