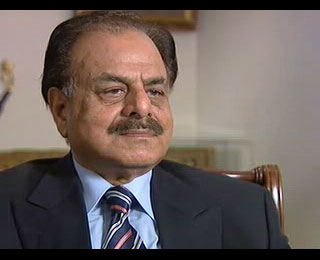 «I don’t know why America is so much after me,» said the bluff, moustachioed Gul from his home in the military cantonment area of Rawalpindi, the garrison town south of Islamabad.

Gul was director-general of the ISI from 1987 to 1989, at the end of a mujahideen war, covertly funded by the United States and Saudi Arabia, to drive the Soviet army out of Afghanistan.

It was at the tail-end of this period that Pakistani support began for a separatist movement in Indian Kashmir. Lashkar-e-Taiba, a group whose leader hails from Sargodha, the same city as Gul, was founded in 1990.

Gul says he supports the Afghan resistance to Western forces at a moral and academic level, but no more than that.

A regular guest on Pakistani news channels, Gul maintains the Sept. 11 attacks in the United States were more likely the work of a neo-con/zionist conspiracy than al-Qaida.

Speculation among analysts and Western media has bubbled for years that the ISI either secretly supports the Taliban, or there are rogue or retired officers helping the insurgents.

An old ISI colleague of Gul’s, Khalid Khawaja said he suspected his was another name the United States aimed to add to the UN list.

Khawaja said he kept up with old Taliban and militant contacts, but denied those ties extended to anything illegal.

«I openly say I have links with these people,» he said. In contrast, Gul said he had severed all contact with the Taliban after 2001, and added that he had never been close to them as his Afghan connections were principally with the old mujahideen commanders from the 1980s.

The News reported that an unsigned two-page document purported that Gul had recent links to the Taliban and al-Qaida.

Earlier, a U.S. secret document has declared ISI former chief, General Hameed Gul maintaining links with the Taliban and Al-Qaeda network besides being involved in arranging financial assistance to them.

The two-page unsigned document had already been provided to the government. Sources on the condition of anonymity told that Hameed Gul had been blamed for arranging financial assistance to the criminal groups operating in Kabul beside he has been involved in recruiting the youths from seminaries and giving them training in subversion, who allegedly launch assaults on the Allied Forces with high-tech weapons.


US wants me on terror list: Pak former ISI chief