My phone includes at least a dozen entries for middle-class families who have given up and moved away. They were supposed to build democracy here. Instead they work odd jobs in Syria and Jordan. Even the moderate political leaders have left. I have three numbers for Adnan Pachachi, the distinguished Iraqi statesman; none have Iraqi country codes.

Neighborhoods I used to visit a year ago with my armed guards and my black abaya are off limits. Most were Sunni and had been merely dangerous. Now they are dead. A neighborhood that used to be Baghdad’s Upper East Side has the dilapidated, broken feel of a city just hit by a hurricane.

The Iraqi government and the political process, which seemed to have great promise a year ago, have soured. Deeply damaged from years of abuse under Saddam Hussein, the Shiites who run the government have themselves turned into abusers.

Never having covered a civil war before, I learned about it together with my Iraqi friends. It is a bit like watching a slow-motion train wreck. Broken bodies fly past. Faces freeze in one’s memory in the moments before impact. Passengers grab handles and doorframes that simply tear off or uselessly collapse.

I learned how much violence changes people, and how trust is chipped away, leaving society a thin layer of moth-eaten fabric that tears easily. It has unraveled so quickly. A year ago, my interviews were peppered with phrases like »Iraqis are all brothers.» The subjects would get angry when you asked their sect. Now some of them introduce themselves that way.

I met Raad Jassim, a 38-year-old Shiite refugee, in a largely empty house, recently owned by Sunnis, where he now lives in western Baghdad. He moved there in the fall, after Sunni militants killed his brother and his nephew and confiscated his large chicken farm north of Baghdad. He had lived with Sunnis his whole life, but after what happened, a hatred spread through him like a disease.

»The word Sunni, it hurts me,» he said, sitting on the floor in a bare room, his 7-year-old boy on his lap. »All that I have lost came from this word. I try to avoid mixing with them.»

»A volcano of revenge» has built up inside him, he said. »I want to rip them up with my teeth.»

I met Haifa and her husband, Hassan, both teachers, in a driveway in western Baghdad. They had just found the body of their 12-year-old son, who had been kidnapped and brutally killed, and were frantic with grief. They finally decided to leave Iraq, but its violence tormented them to the end. They paid a man to drive them to Jordan, but he was working with Sunni militants in western Iraq, and pointed out Hassan, a Shiite, to a Sunni gang that stopped the car. Over the next several hours, Haifa waved a tiny Koran at men in masks, pleading for her husband’s release, her two remaining children in tow.

Hassan, meanwhile, knelt in a small room, his hands behind his back. His captors shot a man next to him in the neck. Haifa, a Sunni, eventually prevailed on them to let him go. The family returned to Baghdad, then borrowed money to fly to Jordan.

Now they live there, in a tiny basement apartment without windows in a white stone housing project on the side of a hill. Like many Iraqis there, they live in hiding. Residency permits cost $100,000, far beyond their means. Hassan cannot work, nor even risk leaving the house during the day for fear the Jordanian police will deport him.

He tries not to talk to people, afraid someone will recognize his Iraqi accent. He doesn’t bargain in the vegetable market. He accepts mean remarks by Jordanian cabdrivers wordlessly.

Most of all, he wants to go home. »But death is waiting for us there,» he tells me. »We are homeless. Please help us.»

THE WORLD: EYEWITNESS; It Has Unraveled So Quickly 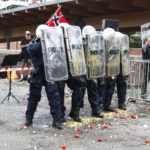