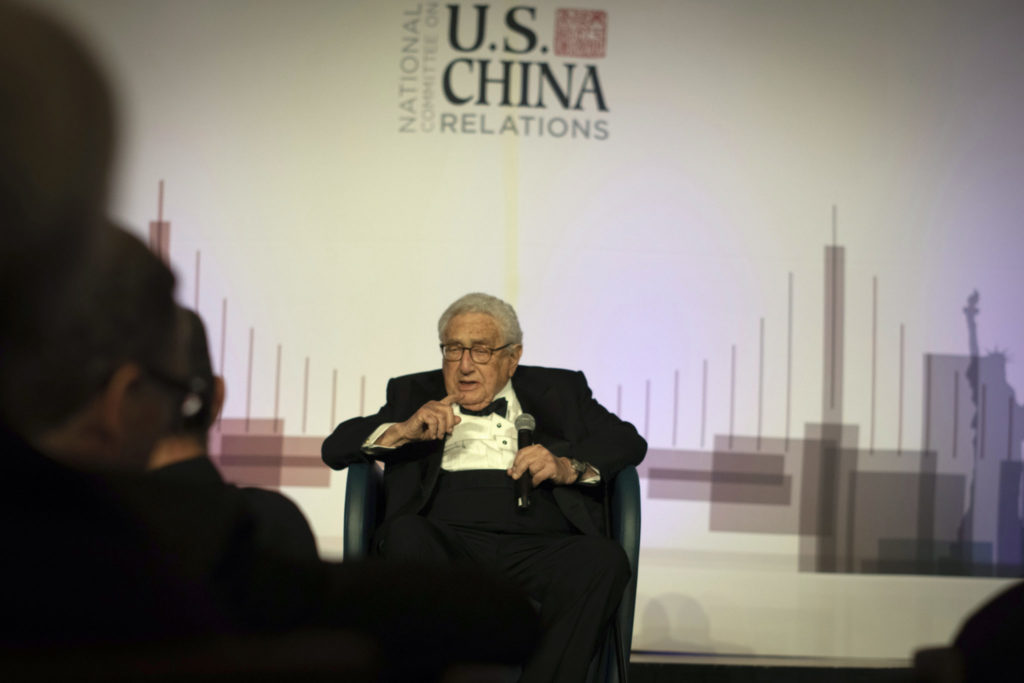 «I would think we need first of all a dialogue with the Chinese leadership in which we are defining what we’re attempting to prevent and in which the two leaders agree that whatever other conflicts they have they will not resort to military conflict,» Henry Kissinger told Bloomberg News Editor-in-Chief John Micklethwait on November 16 at the Bloomberg New Economy Forum. «Unless there is some basis for some cooperative action, the world will slide into a catastrophe comparable to World War I.»

Of course no one wants war of any type with China, but in a little over 14 minutes Kissinger managed to totally misinterpret Chinese history, support Beijing’s most important foreign policy goal, and give deeply misguided advice to Joe Biden. Kissinger has evidently learned nothing from years of dangerous Chinese behavior, which is partly the result of his policy formulations.

We start with history, because Kissinger was once an accomplished historian and his incorrect opinions on China today appear to flow from his unsupportable views of the Chinese past. He makes the case that Americans cannot understand Beijing’s insecurity.

«Americans have had a history of relatively uninterrupted success,» he noted. «The Chinese have had a very long history of repeated crises. America has had the good fortune of being free of immediate dangers. Chinese have usually been surrounded by countries that have had designs on their unity.»

Even if his comments were true, no country now threatens China. China, in fact, has not faced any credible external threat to its unity for more than seven decades. The Communist Party dwells on history, such as the so-called «Century of Humiliation,» the subject of ruler Xi Jinping’s National Day speech last October, because that telling of history suits the needs of today’s insecure regime.

China’s troubled past, in short, is an excuse. What, after all, is it in history that justifies present-day Chinese aggression against India, Bhutan and Nepal, or its designs on Tajikistan, the Philippines and Malaysia?

Moreover, what justification is there for the Communist Party’s declaration of a «people’s war» on the United States in May of last year?

China is aggressive and militant at this moment because of the nature of its communist regime, which is quickly driving the country back to one-man rule and totalitarianism. Xi Jinping, the one man in China’s system, is now propagating the audacious concept of tianxia, that «all under heaven» owe allegiance to Beijing.

There are, unfortunately, some points in history when dialogue makes matters worse because hardline leaders perceive others’ desire to talk as a sign of weakness.

In any event, dialogue assumes that Chinese leaders can compromise, which at this point is a dubious proposition. For instance, Beijing last compromised a territorial claim in 2011 — with Tajikistan, when it took Tajik territory — but now is trying to reopen the settlement to grab even more. Since then, Beijing has added new claims — to the South China Sea — and has laid the groundwork for additional ones, especially over Japan’s Ryukyu chain.

Kissinger, often cited as a deterrence expert, is now not a fan of it. When Micklethwait asked him whether he favored the notion of Biden advisors that democracies should unite in a coalition, the 97-year-old «grand consigliere of American diplomacy» — the Financial Times‘s description — was noncommittal. «I think democracies should cooperate wherever their convictions allow it or dictate it,» he replied. «I think a coalition aimed at a particular country is unwise, but a coalition to prevent dangers is necessary where the occasion requires it.» In Kissinger-speak, that is a «no» to international cooperation against Beijing.

Given what could be happening inside Communist Party political circles, there may now be no way to avoid war with a militant Chinese state. Yet whether peace is possible or not, it should be clear to Kissinger that the approach he has supported, and which has been adopted by every American president since President Nixon went to China in 1972, has contributed to Chinese aggressiveness. Kissinger, by urging conciliation when Beijing has made clear it cannot be appeased, has helped produced today’s grave situation.

Let us remember that Kissinger has always been intimidated by large communist states. He advocated détente in the early 1970s when he assumed there was no way to prevail over the Soviet Union. Reagan, after refusing to accept the USSR as a given, proved him dead wrong.

And Kissinger is dead wrong now. «Trump has a more confrontational method of negotiation than you can apply indefinitely,» Kissinger told Micklethwait, appearing to speak to Joe Biden. That, James Fanell, the noted Swiss-based China strategist told Gatestone, is «an unambiguous declaration of Dr. Kissinger’s defeatism.»

As Fanell, a former director of Intelligence and Information Operations of the U.S. Pacific Fleet, said, Kissinger believes the U.S. «cannot compete with the People’s Republic of China.»

America, however, is far stronger than China’s regime and has allies, which China, other than North Korea, does not. Moreover, the U.S. is knitting together a formidable coalition — the Quad with Australia, India, and Japan — giving Washington the ability to continue to confront Beijing on every front. The Chinese state is no match for nations, both near and far, it seems determined to antagonize.

What is the best indication that Kissinger is wrong? Beijing at the moment is waging a concerted propaganda campaign to push his views as widely as possible. When your enemy wants you to do something, it is almost always not in your interest.

Kissinger essentially said the choice for America is cooperation or war, a narrative he has propagated in recent interviews. Yet repetition will not make his false dichotomy so. Countries can, between these two extremes, choose confrontation and deterrence. World War II in Europe, for example, started because Britain and France chose not to confront the Third Reich when doing so — in 1936 during the attempted remilitarization of the Rhineland — would have ended the German military threat.

Micklethwait started out the interview by asking about the Congress of Vienna, the subject of Kissinger’s A World Restored: Metternich, Castlereagh and the Problems of Peace 1812-22. «Whenever peace—conceived as the avoidance of war—has been the primary objective of a power or a group of powers, the international system has been at the mercy of the most ruthless member of the international community,» he wrote. «Whenever the international order has acknowledged that certain principles could not be compromised even for the sake of peace, stability based on an equilibrium of forces was at least conceivable.»

Kissinger ducked the question and, for some reason, is now suggesting the United States put itself at the mercy of the world’s most ruthless regime.

Gordon G. Chang is the author of The Coming Collapse of China, a Gatestone Institute Distinguished Senior Fellow, and member of its Advisory Board. Follow him on Twitter and Parler @GordonGChang.