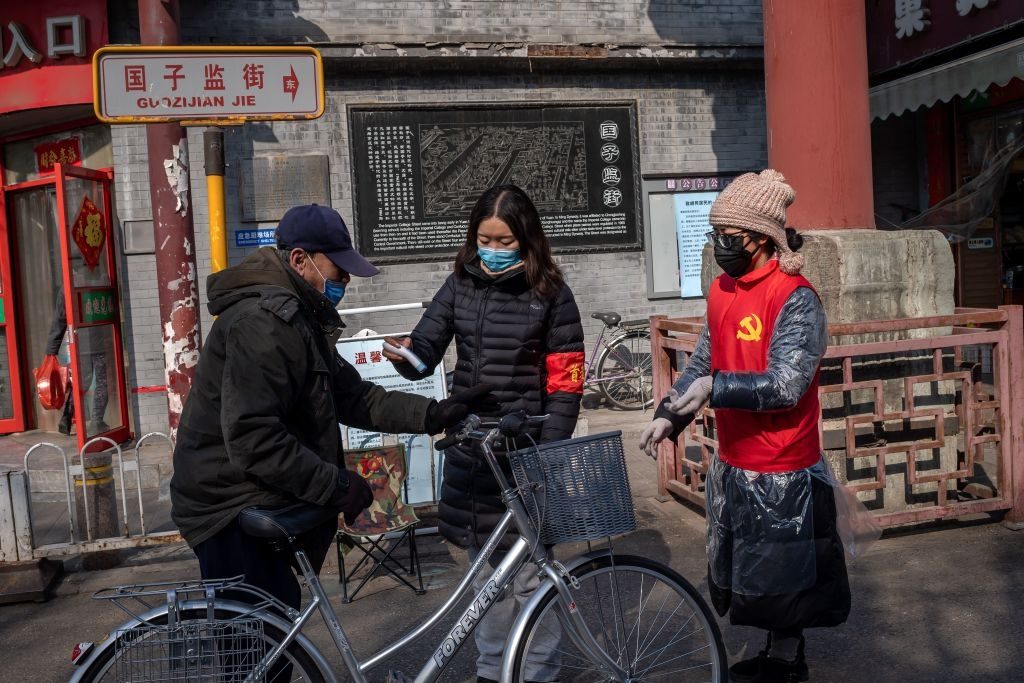 Community volunteers (R) wearing a protective facemasks and gloves to protect against the COVID-19 coronavirus secure the entrance of a residential area as they take the temperature of a man on a street in Beijing on February 23, 2020. – The coronavirus epidemic that has killed over 2,400 people is communist China’s «largest public health emergency» since its founding, said President Xi Jinping on February 23. (Photo by NICOLAS ASFOURI / AFP) (Photo by NICOLAS ASFOURI/AFP via Getty Images)

Last July, five American analysts who have been consistently wrong told us«China is not an enemy.»

Actually, this time they were technically right. China’s communism is not an enemy. It is the enemy.

After the coronavirus pandemic subsides, Americans should not forget Beijing’s malicious campaign against their country.

For more than a month, the central government’s foreign ministry and the Communist Party’s Global Times have been trying to tar the Trump administration. The campaign culminated in a series of tweets from rising Beijing star Zhao Lijian, foreign ministry spokesman and deputy director general of the ministry’s Information Department.

On March 12, in a tweet, he accused U.S. officials of being «immoral.» Hours before, he had tweeted that «patient zero» was in the U.S. and suggested that the U.S. Army had «brought the epidemic to Wuhan» — intimating that America was conducting germ warfare.

Also that day, foreign ministry spokeswoman Hua Chunying, Zhao’s boss, twisted testimony of Robert Redfield, director of the Centers for Disease Control and Prevention, to try to show that the coronavirus outbreak had started in America.

President Donald J. Trump, in his Rose Garden press conference the next day, March 13, downplayed the overtly hostile messages. He first noted his conversations with Chinese ruler Xi Jinping and then said, referring to Chinese leaders, «they know where it came from.»

Actually, it is worse if Chinese officials in fact knew where the coronavirus originated. In this case, these officials, by going out of their way to blame the U.S., were demonstrating once again the inherent hostility of their system to America.

Unfortunately, Beijing cannot be deterred. The U.S. State Department on March 13 summoned Chinese Ambassador Cui Tiankai to protest the foreign ministry’s disinformation campaign. Despite the warning, the Chinese ambassador to South Africa, Lin Songtian, on March 16 continued to promote the coronavirus-not-originated-in-China theory, with a tweet.

From here, it looks as if relations are only going to deteriorate. For one thing, Beijing’s official Xinhua News Agency has been threatening to cut off «medical supplies,» «plunging» America into a «mighty sea of coronavirus.»

Beijing’s threat to cut off supplies and harm Americans will only encourage the U.S. to cut trade with China, or, more precisely, to not allow trade to return to pre-coronavirus levels. Reducing commerce, some believe, is the only long-term solution for the U.S. as Chinese communists have tried to use their central role as a manufacturer to spread totalitarianism and advance other geopolitical goals anathema to the Western democracies.

The cutting of links will still leave trade at high levels, at least at first. Nonetheless, the large volume of commerce, often called the «ballast» of China-U.S. ties, probably will not stabilize relations.

«Does trade increase or decrease the likelihood of conflict?» Samuel Huntington, the late Harvard political scientist, asked in The Clash of Civilizations and the Remaking of World Order. «The assumption that it reduces the probability of war between nations is, at a minimum, not proven, and much evidence exists to the contrary.»

High levels of trade did not prevent the First World War, he pointed out in that landmark book. As Huntington, building on the work of others, noted, what is important is expectation. «Economic interdependence fosters peace,» he wrote, «only ‘when states expect that high trade levels will continue into the foreseeable future.'» If, however, trade partners «do not expect high levels of interdependence to continue, war is likely to result.»

Trump expects trade between the two nations to increase, saying on March 13 that China will be buying $250 billion more products pursuant to the Phase One trade deal signed January 15. Beijing in that agreement generally promised within a two-year period to increase purchases of U.S. goods and services by $200 billion over 2017 levels.

Trump’s optimism is not shared in Beijing, however. China, using the epidemic as an excuse, is now pushing to change the agreement by deferring its purchase obligations, the heart of the arrangement as far as the U.S. is concerned.

The Global Times notes that the pandemic inhibits Chinese demand for American goods, but that is not necessarily a good reason for relief from the terms of the deal.

Why not? Xi Jinping, after all, knew about the coronavirus epidemic long before he authorized the signing of the deal in the White House. In February, he said he had chaired a meeting of the Party’s Politburo Standing Committee on January 7 in which he issued orders to contain the epidemic. Xi’s knowledge of the outbreak on January 15 and his push for relief now, therefore, makes him look cynical. In all probability, he had no intention of honoring his side of the bargain from the beginning. Recall that Xi broke his September 2015 pledges to former President Barack Obama not to militarize China’s artificial islands and not to hack America for commercial purposes.

In any event, this year Sino-U.S. trade will almost certainly decline. Such a delinking would be in line with Trump’s stated desire to bring manufacturing back home.

The president has evidently been thinking about these matters for a long time. On July 21, 2017, for instance, he issued his Executive Order on Assessing and Strengthening the Manufacturing and Defense Industrial Base and Supply Chain Resiliency of the United States. The Defense Industrial Base study, as it is known, exposed American vulnerabilities and led to actions to encourage manufacturing to return home. Trump can now use his sweeping powers granted under the International Emergency Economic Powers Act of 1977 to continue this essential process.

Of course, war does not inevitably result when countries «delink,» «decouple,» or «disengage» their economies. Yet China and the U.S. are also moving apart as Americans become wary of an increasingly belligerent Chinese state, one that already has demonstrated that it has, for instance, little reluctance to injure Americans.

China, as we now know, allowed the coronavirus to spread for six weeks in December and January before Xi publicly acknowledged the disease. So, it is no surprise that Americans — and the Chinese people, who are now demanding fundamental political change — realize that the real disease is communism.

Coronavirus proves that for America and the Free World, China’s communism is the enemy — the one that really counts.

Gordon G. Chang is the author of The Coming Collapse of China and a Gatestone Institute Distinguished Senior Fellow