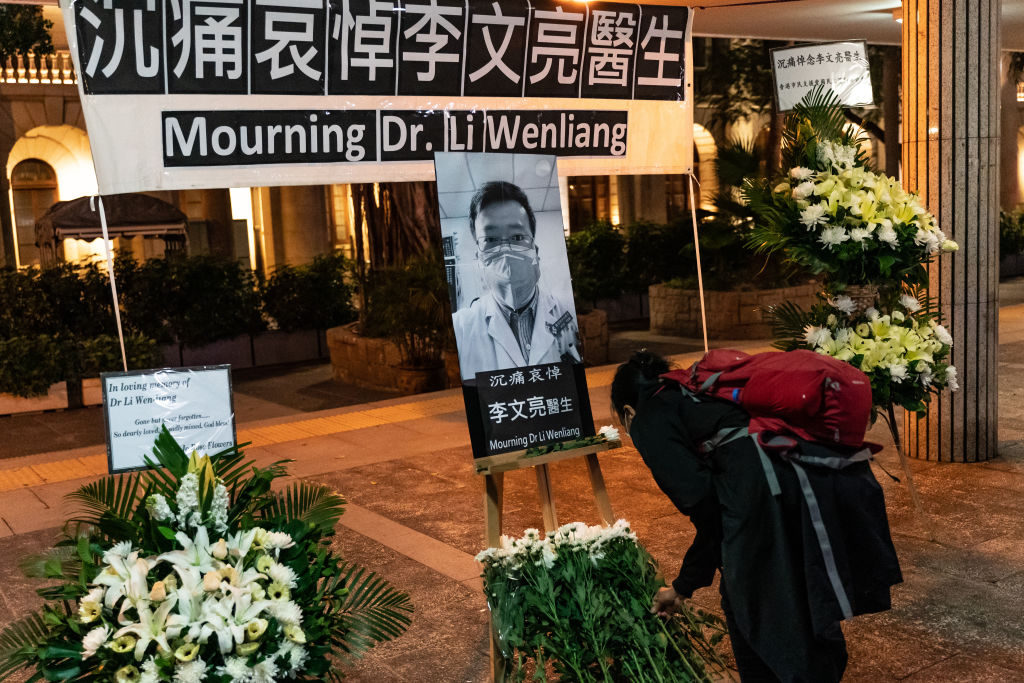 Dr. Li Wenliang, who died from the coronavirus on January 31, had been reprimanded by the Chinese government, with seven other doctors, for warning of the outbreak in December. He was accused of «spreading false rumors» and «disrupting social order» and, for his brave efforts, was briefly detained and interrogated. Pictured: A vigil to mourn Wenliang on February 7 in Hong Kong. (Photo by Anthony Kwan/Getty Images)

On hearing the news that Dr. Li Wenliang had died from the coronavirus on January 31, people in the central Chinese city of Wuhan, under strict quarantine, opened their windows and cried. Others took to the streets to blow whistles for the whistleblower. Grief and anger, expressed from China’s streets and balconies and social media platforms, has reached almost unprecedented levels in recent days.

Li, reprimanded with seven other doctors for warning of the outbreak in December, was accused of «spreading false rumors» and «disrupting social order» and, for his brave efforts, was briefly detained, interrogated, and forced to sign an «admonishment notice.» Li undoubtedly contracted the virus treating patients at Wuhan Central Hospital.

The first official announcement of his death, on Thursday night, sparked online outrage. State media, perhaps to mollify public opinion, then said he was alive but critically ill. When he was pronounced dead for a second time, the announcement was followed by a white-hot uproar. Chinese censors scrubbed millions of social media postings supporting the young doctor. Li was 34 years old.

Some say that as memory of the disease wilts in the heat of the upcoming summer, the Chinese political system will be able to resist change. On the contrary, the disease ravaging the country could be, as is now said, China’s «Chernobyl,» the cover up of a disaster eventually leading to the downfall of the regime.

Firmly in the no-Chernobyl camp is former Australian Prime Minister Kevin Rudd. «Xi wields near-absolute political power over China’s Marxist-Leninist state,» he wrote in a February 8 column. It is «certain,» he assures us, «that the crisis, once resolved, will not change how China is governed in the future.»

Rudd’s argument is that Xi’s priorities, which he calls «ten sets of concentric circles emanating from the party center,» will remain the same. Foremost among those priorities is maintaining the country’s political system. As Rudd, now president of the Asia Society Policy Institute, notes, «Since coming to power in 2012, Xi has strengthened the Communist Party’s hold on power and developed a comprehensive national agenda from which all else — including domestic crisis management — must follow.»

Is Xi that strong? He has defied expectations and accumulated power not seen since the days of Deng Xiaoping, Mao’s crafty successor. Some analysts compare his position to that of Mao himself. Politically, Xi seems to have «nine lives.»

He is almost certainly laying the groundwork for having his adversary, Premier Li Keqiang, take the blame when things go wrong. Li, most notably, has been put in charge of coordinating Beijing’s response to the disease.

On January 26, the Communist Party announced that Li would be chairing China’s task force, the Central Leading Small Group for Work to Counter the New Coronavirus Infection Pneumonia Epidemic. Xi has also borrowed a tactic from Mao and retreated from the spotlight by largely disappearing from the official media during the last week of January.

Yet, as clever as Xi has been, there are reasons why he cannot escape responsibility. First, his great power brings with it accountability, and he seems to realize there are occasions when he must acknowledge his primacy. In the fight against the epidemic, Xi said in a January 28 meeting in Beijing with World Health Organization Director-General Tedros Adhanom Ghebreyesus, «I, myself have been directing and arranging the work.»

Second, the Chinese economy, due to the epidemic and other reasons, looks as if it is contracting, not only quarter-to-quarter but year-to-year. Chinese oil demand is now down 20% from this time last year. Many factories and stores remain shut, long after the end of the Lunar New Year holiday. The spring session of the Canton Fair, scheduled for April, has been cancelled. Airlines have cut flights to China; many routes have been indefinitely suspended.

This emergency comes as the economy was already slowing, in reality growing about 2% before the epidemic, and while defaults were taking place.

Many analysts expect Beijing to stimulate the economy, but stimulus works only if there is underlying economic activity. With much of the economy shut down, there is not much to stimulate. A dead economy is an existential crisis for a regime whose primary basis of legitimacy is the continual delivery of prosperity.

Third, the Chinese people, as evident from the reaction to the death of Li Wenliang, are not going to be swayed by Xi’s internal Communist Party maneuverings. For one thing, local officials have blown Beijing’s cover. On January 27, Zhou Xianwang, the mayor of Wuhan, publicly said he could not disclose the coronavirus epidemic to the public because he was waiting for authorization from higher-ups. That charge made no one in Beijing look good.

The Chinese people, partly as a result of Zhou’s finger-pointing, are furious, and unlike earlier episodes of Beijing malfeasance, they are now talking about fundamental issues and demanding basic rights. The refrain now heard across China is, «We want freedom of speech!» People in that stricken society, like those seeking freedom in Hong Kong, have adopted as their anthem the politically impactful song from Les Miserables, «Do You Hear the People Sing?»

The death of Dr. Li comes after a Tsinghua University law professor, Xu Zhangrun, last week publicly called Xi Jinping «not very smart» and asked him to step down. At about the same time, Xu and eight others signed an open letterto the National People’s Congress, titled «The Right to Freedom of Speech Starts Today.»

The boldness of recent demands shows that, due to the outbreak, the Chinese people are starting to lose their fear of Xi and the Communist Party. Rudd and Chinese propagandists are saying the Party will weather this crisis, but when people are no longer afraid, anything can happen.

When people lose fear, they either think they can do anything or they simply do not care about the consequences. That is often the moment when mighty-looking political systems crumble.

Xi must be bracing himself for the early summer, after the virus peaks in April and May in major population centers outside Hubei province, the current epicenter. Then, the Chinese people will in earnest talk about who is to blame.

Right now, Xi is focused more on controlling the national narrative than in ending the disease. The composition of the nine-member Central Leading Small Group, described above, is particularly disturbing. There is only one public health official on the roster, which is heavy with political hacks and propaganda officials. The Party propaganda czar, Wang Huning, is vice chair. «Maintaining the integrity of Xi Jinping’s dictatorial rule is evidently the Leading Group’s primary focus,» China watcher Charles Burton of Ottawa’s Macdonald-Laurier Institute told Gatestone.

Xi Jinping, however, has already lost the battle over the narrative. His waging a propaganda effort hinders his ability to eradicate the disease. Secrecy and the suppression of information never help.

In any event, one woman is not going to allow the authorities to suppress information for long. «If they do not give us an explanation, we will not give up,» said Lu Shuyun, the mother of Dr. Li Wenliang, demanding to know why Wuhan police harassed him while he was trying to save patients.

Can one woman stand against strongman Xi Jinping? In this contest, bet on the mother. After all, she has about 1.4 billion angry people on her side.

Gordon G. Chang is the author of The Coming Collapse of China and a Gatestone Institute Distinguished Senior Fellow.