Christians Beheaded for Christmas, The West Goes Back to Sleep 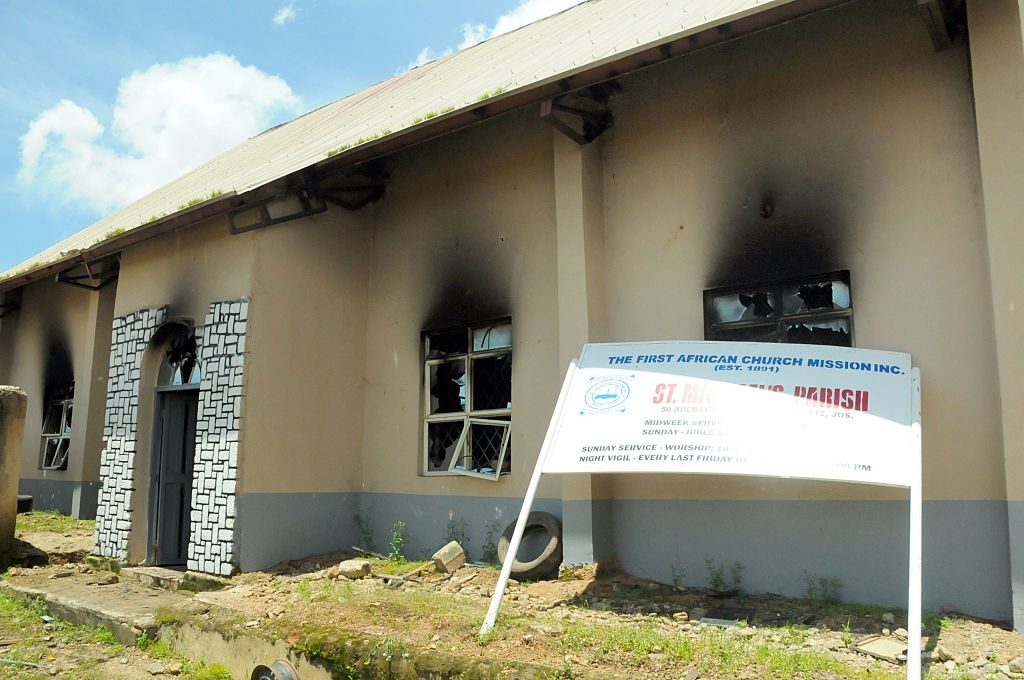 The burnt First African Church Mission of Jos is pictured on July 6, 2015 in the central Nigerian city of Jos, Plateau State, after a twin bomb blasts killed at least 44 people the day before, following a wave of mass casualty attacks blamed on Boko Haram militants. The blasts happened within minutes of each other at a shopping complex and near a mosque in the religiously divided capital of Plateau state, which the rebels have targeted before. The bombings took the death toll from raids, explosions and suicide attacks to 267 this month alone and to 524 since Muhammadu Buhari became president on May 29, according to an AFP count. AFP PHOTO (Photo credit should read -/AFP via Getty Images)

Martha Bulus, a Nigerian Catholic woman, was going to her bridal party when she was abducted by Islamic extremists of Boko Haram. Martha and her companions were beheaded and their execution filmed. The video of the brutal murders of these 11 Christians was released on December 26 to coincide with Christmas celebrations. It is reminiscent of the images of other Christians dressed in orange jumpsuits bent on their knees on a beach, each being held by a masked, black-clad jihadist holding a knife at their throats. Their bodies were discovered in a mass grave in Libya.

On the scale of Nigeria’s anti-Christian persecution, Martha was less fortunate than another abducted girl, Leah Sharibu, who has now been in captivity nearly two years and just spent her second Christmas in the hands of Boko Haram. The reason? Leah refused to convert to Islam and deny her Christianity. Nigerian Christian leaders are also protesting the «continuous abduction of under-aged Christian girls by Muslim youths…». These girls «are forcefully converted to Islam and taken in for marriage without the consent of their parents».

Nigeria is experiencing an Islamist war of the extermination of Christians. So far, 900 churches in northern Nigeria have been destroyed by Boko Haram. U.S. President Donald J. Trump was informed that at least 16,000 Christians have been killed there since 2015. In one single Nigerian Catholic diocese, Maiduguri, 5,000 Christians were murdered. How much bigger and more extended must this war on Christians become before the West considers it a «genocide» and acts to prevent it?

The day after Christians were beheaded in Nigeria, Pope Francis admonished Western society. About beheaded Christians? No. «Put down your phones, talk during meals», the Pope said. He did not speak a single word about the horrific execution of his Christian brothers and sisters. A few days before that, Pope Francis hung a cross encircled by a life jacket in memory of migrants who lost their lives in the Mediterranean Sea. Last September, the Pope unveiled a monument to migrants in St. Peter’s Square, but he did not commemorate the lives of Christians killed by Islamic extremists with even a mention.

Cardinal Robert Sarah, one of the very few Catholic Church leaders who mentioned the Islamic character of this massacre, wrote, «In Nigeria, the murder of 11 Christians by mad Islamists is a reminder of how many of my African brothers in Christ live faith at the risk of their own lives.»

It is not only the Vatican that is silent. Not a single Western government found time to express horror and indignation at the beheading of Christians. «Where is the moral revulsion at this tragedy?», asked Nigerian Bishop Matthew Kukah after the Christmas massacre. «This is part of a much wider drama we are living with on a daily basis».

European leaders should follow the example of British Prime Minister Boris Johnson, who, in his first Christmas message to the nation said:

«Today of all days, I want us to remember those Christians around the world who are facing persecution. For them, Christmas Day will be marked in private, in secret, perhaps even in a prison cell».

German Chancellor Angela Merkel has said that her priority will be fighting climate change. She did not mention persecuted Christians. French President Emmanuel Macron in his mid-winter speech was not even able to say «Merry Christmas«.

Europe’s leaders failed to condemn the barbaric execution of Christians on Christmas Day: political correctness is corroding Western society from within.

At the beginning of December, another African bishop, Justin Kientega of Burkina Faso, said: «Nobody is listening to us. Evidently, the West are more concerned with protecting their own interests».

«Why is the world silent while Christians are being slaughtered in the Middle East and Africa?», wrote Ronald S. Lauder, president of the World Jewish Congress.

«In Europe and in the United States, we have witnessed demonstrations over the tragic deaths of Palestinians who have been used as human shields by Hamas, the terrorist organization that controls Gaza. The United Nations has held inquiries and focuses its anger on Israel for defending itself against that same terrorist organization. But the barbarous slaughter of thousands upon thousands of Christians is met with relative indifference».

Where were the Western governments when thousands of young Muslims entered Syria and Iraq to hunt and kill Christians and destroy their churches and communities? The West did nothing and suffered for its inaction. The Islamists started with Christians in the East and continued with «post-Christians» in the West. As the French medievalist Rémi Brague said, «The forces that want to drive Christians out of their ancestral lands would ask themselves, why not continue in the West a work so well begun in the East?».

There has been no outrage in the West about cutting off Christian heads, only silence, interrupted by «Allahu Akbar», gunshots and bombs. The history books of the future will not look kindly this Western betrayal — depending on who writes them. The end of the Christians of the East will be a disaster for the Church in the West. They will no longer have anyone living in their own cradle of civilization.

What would we be reading if, for instance, Christian terrorists had stopped a bus, separated the passengers according to their faith, ordered the Muslims to convert to Christianity and then murdered 11 of them? The opposite just happened in Kenya. What did we read? Nothing. On December 10, the Islamic terrorist group Al Shabaab stopped a bus in northern Kenya, then murdered only those who were not Muslims. We Westerners are usually moved by the persecution of this or that minority; why never for our Christians?

The Christianophobia of the Muslim extremists who massacre Christians in Middle East and Africa is central to a totalitarian ideology that aims to unify the Muslims of the ummah (the Islamic community) into a Caliphate, after destroying the borders of national states and liquidating «unbelievers» — Jews, Christians, and other minorities as well as «Muslim apostates». Nigeria is now at the forefront of that drama.

«Nigeria is now the deadliest place in the world to be a Christian», noted Emmanuel Ogebe, an attorney.

The West goes back to sleep. «The West opened its borders without hesitation to refugees from Muslim countries fleeing war», wrote the economist Nathalie Elgrably-Lévy. «This seemingly virtuous Western solidarity is nevertheless selective and discriminatory». Persecuted Christians have been abandoned by the Western governments and public squares.

India’s Prime Minister Narendra Modi has recently been besieged by Muslims protesting a new law that would offer citizenship to neighboring non-Muslims fleeing persecution. Tarek Fatah explained in the Toronto Sun that the Muslim outrage on the new Indian law comes from the fear «that allowing citizenship to persecuted Pakistani Christians, Hindus and Sikhs would increase the non-Muslim population of the country and thus dilute their veto power they’ve exercised in India for the last 70 years».

Where are the squares filled with Londoners or New Yorkers for the Christian refugees discriminated by the West? In the parts of Syria occupied by Islamists, Christians just spent a «special Christmas» — without chime bells or lights and with many of their churches turned into stables.

«War in Syria has reignited. Once again refugees fill its roads in need of our compassion. Yet those from the ‘wrong faith’ won’t find it from the British Government. The UK’s resettlement of 16,000 refugees from the earlier conflict saw hardly any from the most brutalised minorities reach safety in our land. Of the refugees who came here in 2015 under the Vulnerable Persons Scheme, only 1.6 per cent were Christians. That’s despite this group being 10 per cent of the Syrian population».

Muslims fill Western squares for their own; but for our persecuted Christian brothers, these squares remain vacant.

Christians Beheaded for Christmas, The West Goes Back to Sleep
by Giulio Meotti
January 5, 2020 at 5:00 am