When Theo van Gogh was murdered by an Islamist on a street in Amsterdam, Ayaan Hirsi Ali could not even attend the funeral because she would have put the lives of others at risk. So the Dutch intelligence agreed to take her to the morgue. The next day, bodyguards accompanied her from her home and gave her three hours to pack and leave. From there she went to the air base at Valkenburg, near The Hague, where she would be embark on a plane. The portholes were closed, they told her not to approach them nor go near the door. The plane was full of soldiers. Hirsi Ali was leaving a country at war. They landed at a military base in Maine, in the United States. This is how the love affair between America and the first refugee from Western Europe since the Holocaust began. A story that continues to this very day. 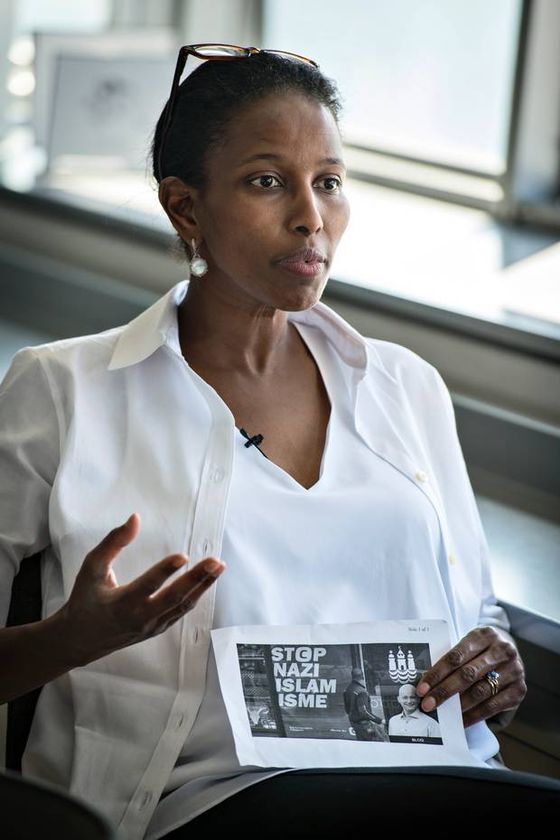 Ayaan Hirsi Ali is still a shadow. But her voice at the telephone is clear, tough, cool. It is that of a young Somali woman who has undergone genital mutilation, who has lived in Saudi Arabia, Ethiopia, Kenya, before being betrothed to a Canadian cousin she had never seen before. Hirsi Ali escaped from Germany to the Netherlands.

She worked as an interpreter in the Islamic Dutch ghettos, she graduated, became a Liberal MP, helped Van Gogh to make the film “Submission” and then disappeared. Now she talks with me about Europe from her think tank, the American Enterprise Institute. Hirsi Ali recently released her third book on Islam, “Heretic”, an optimistic book on the reform of Islam.

Where does your optimism for a reform of the Islamic world come from?

“It is a possibility, not a certainty. But I am optimistic because of the violence committed today in the name of Islam, which is creating so much tension, and it is not just committed by individuals, but by states and organizations. People are more and more afraid of radical Islam. In Egypt, in Tunisia, everywhere, there are large numbers of young Muslims who identify themselves as Muslims, but who do not want sharia, Islamic law. Just as many women do not want sharia.”

On February 1, many feminists around the world will celebrate the World Hijab Day, the International Day of the Islamic veil.

“It is multiculturalism, the ideology that eliminates the rights of individuals in favor of groups, communities. Europe is committing a cultural suicide.”

What should happen to kick off a reform?

“You must first answer a fundamental question: how can someone be Muslim and be in favor of the separation of mosque and state, freedom of expression, rights of the woman? The attitude towards the Qur’an and Muhammad must change, because the Islamists use the Koran and the texts literally. We need a revolt within the house of Islam, against the culture of death, rejecting Sharia, rejecting the jihad, the killing of non-Muslims.”

You were the first authentic dissident in the Islamic world.

“The dissidents of Islam are fundamental, because we are those who ask the critical questions, who pursue the critical thinking. Asking the questions means risking your life. It was the same Imam Qaradawi who recognized the role of dissidents when he said that you can not accept apostasy and it deserves death.”

Your name appears in the same list of targets alongside the late director of Charlie Hebdo, Stephane Charbonnier, and other cartoonists.

“My name was on the list of Charlie, so I am not surprised by what happened a year ago. Charbonnier and the other journalists were heroes. Unfortunately, today there is a combination of fear and multiculturalism, moral relativism, the sense of guilt for the Muslim population because of colonialism. When I started going to university in the Netherlands, many did not want to hear about the Holocaust in the classroom, they were told not to speak of the Jews of Israel. This served to suppress criticism of Islamic doctrine. We must stop demonizing Israel and learn from it.»

«Unfortunately, today countries like Saudi Arabia do great missionary work in Europe, trying to suppress dissent. Freedom of expression is therefore fundamental for the opening of the Islamic world to reason. But sometimes I think it’s too late. Think about Italy, France, Germany, England, the whole great tension between Muslims and Europeans. In this context it is becoming difficult, more difficult, to exercise the right to freedom of speech.»

«I am happy in America, but even here there are the Muslim Brotherhood and other Islamist organizations. In ten years I have seen a significant radicalization in America”.

One million immigrants have arrived in Germany this year and another million are expected. Hirsi Ali, who was welcomed by Europe as a refugee from Somalia, now asks Europe to stop immigration.

“We are at a critical point in Europe today: the immigration of millions of people must be stopped even before Europe stops the indoctrination in the mosques and imams. If we do not stop the brainwashing, there will be another lost generation in Europe. Muslims must stop Sharia now. I keep repeating it, but who is listening?”.

Since Van Gogh was killed and you fled to America, in the Netherlands nobody longer speaks of Islam. Journalists, cartoonists, intellectuals, have all closed their mouths:

“The people in the Netherlands who write and talk about Islam and these issues are tired. In the Netherlands, but also in France, many Jews are leaving. In Los Angeles I have Dutch Jewish friends who fled from the Netherlands. There is a terrible brain drain from Europe. In Europe they are all paralyzed, in Italy, in Germany, in France, but the political leadership must banish sharia, its propagation is not acceptable. Because sharia is the worst violation of human dignity. Sharia is against civilization and European culture”.