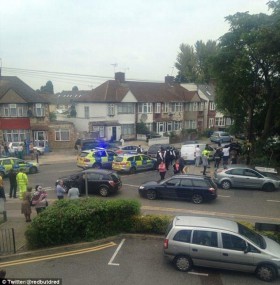 Specialist firearms officers were deployed to an address in Edmonton, north London, just after 1pm where they found the woman’s body.

Eyewitnesses reported seeing a ‘madman with a machete’ in the area.

Scotland Yard has so far refused to comment on reports she had been decapitated and given few details of what happened.

DCI John Sandlin, who is leading this investigation, said: ‘This is was a highly visible attack in broad daylight on a residential street.

‘Whilst it is too early to speculate on what the motive behind this attack was I am confident, based on the information currently available to me, that it is not terrorist related.

When the Law Opposes the Truth Rather Than Protects It - 28. mars 2017