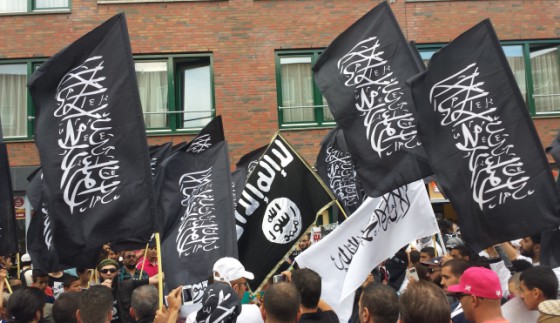 The Gaza demonstration at Hoefkade in the Hague Schilderswijk yesterday ran completely out of hand. It was not Gaza demonstration but an anti-Jewish pro-ISIS demonstration. There was endless often called the «dirty Jews from the sewers’ death had (both in Arabic and in Dutch, it was more about» the Jews «over Gaza), there was whisked to jihad, caliphate and ISIS flags (by adults and small children), and a group of journalists were harassed by dozens of bystanders. Because we took pictures of the demonstration. Yes, really.

lynch mob
I was there and I went there yesterday report via Twitter, because I no longer wanted to be intimidated by types who attend such demonstrations me. Journalists should be able to simply record demonstrations. End of story. GeenStijl colleague Annabel Nanninga was at one point so seriously threatened and harassed that they had to be removed by police. I was standing next to her when she was threatened by people who shouted insults at her that I will not repeat here. From all sides It was a lynch mob. It was horrible.

A man of no more than twenty years old poured a can of cheap energy drink over her. I also got some on me. The killer got away and the reporter was removed by the police. Urgently. At least, that was the idea. But that did not go entirely as desired. The agent present also became frustrated by. It lasted and lasted for the requested police car was there. He sounded desperate when he told his colleagues: «What do not you understand to rush?» I then even left, but not with the second police car arrived racing.

The problem lies with Mayor Jozias van Aartsen, the force manager of The Hague. The city of peace and justice which is now the city of Jihad and Jew-hatred has become. He was not acting. Immediately after the demonstration claimed Van Aartsen blandly that there are no limits have been exceeded during the demonstration. Ridiculous. Arches of the demonstration had never allow. Has he not learned from July 12, when a pro-Gaza demonstration even got out of hand with Nazi flags, flags jihad, anti-Semitic speeches and Hitler Greetings?

Van Aartsen has done nothing. Not before or during the demonstration itself, when it became clear how deeply anti-Semitism and hatred of journalists sitting at the demonstrators. And I take it very ill. Three Hague groups have written questions to Van Aartsen asked: PVV, The Moss Group and CU / SGP. VVD, PVV, Christian Union and VNL have all parliamentary questions. I watch with great interest the answers.