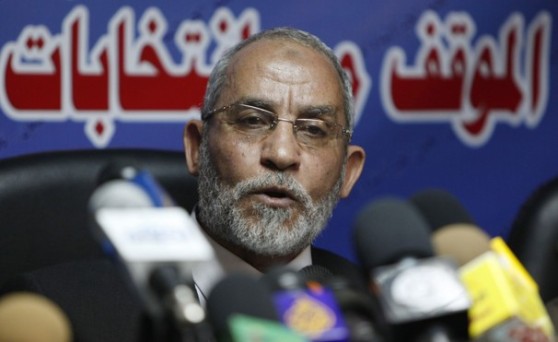 Mohammed Badie said during his weekly message that Jews were spreading “corruption,” had slaughtered Muslims and desecrated holy sites. He further called on Muslims to fight Israel, saying Zionists only understood force.
..
Muslim Brotherhood members frequently make statements against Israel’s occupation of East Jerusalem, accusing Jews of trying to smother the city’s Islamic identity and calling on Muslims to rise up and protect the city and its holy shrines.

But Badie’s statement was the first time the group’s supreme leader has made such strong statements since Morsi’s election. Morsi has avoided speaking of Israel in public, making only pledges to respect Egypt’s international agreements.

Badie referred to longstanding Muslim calls to “defend” Jerusalem’s Al-Aqsa Mosque, a holy site for both Muslims and Jews. Muslims believe the Prophet Muhammad ascended to heaven from there, while Jews call the compound the Temple Mount because of the biblical Jewish temples that stood there.

“It is time for the Muslim (nation) to unite for the sake of Jerusalem and Palestine after the Jews have increased the corruption in the world, and to shed the blood of (Muslims),” Badie said in comments published on the group’s website and emailed to reporters on Thursday.

“Muslims must realize that restoring the sanctuaries and protecting honor and blood from the hands of Jews will not happen through the parlors of the United Nations, or through negotiations. The Zionists only know the way of force,” he added.

Israeli lawmaker Danny Danon called on the U.S. and the European Union “not to bury their heads in the sand and ignore the worrying reality.”

“Incitement and anti-Semitism in Egypt must stop before the U.S. sends (Egypt) hundreds of millions of dollars,” he said in a telephone interview. “The direction of the new Egyptian government is very worrying and we are following with great concern what is being said and done and what is not being done there against extremists.”

The Simon Wiesenthal Center, which monitors anti-Semitic incidents worldwide, also said the U.S. could not pretend to conduct “business as usual” when the Brotherhood made such statements.

“We are not dealing with a YouTube video or a lone extremist imam, but a call to anti-Semitic violence by a man who has tens of millions of followers and leads the organization that controls Egypt’s future,” the center’s Rabbis Marvin Hier and Abraham Cooper were quoted as saying in a statement.

They called on the White House to condemn the speech, and sever official and unofficial contacts with the Muslim Brotherhood.

A leading member of the Brotherhood, Rashad Bayoumi, said the group can’t ignore Israel’s “offense” of Islamic shrines. He said official Egypt policy toward Israel is a separate matter.

“But what there is an offense and meanwhile an agreement,” Bayoumi said, explaining that something must be done about what he said were desecration of holy sites, and Israeli construction and digging in the holy site in the old city.