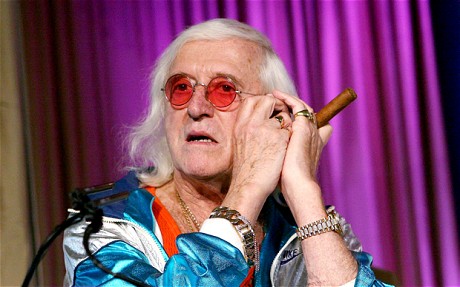 A former patient at Stoke Mandeville, Rebecca Owen, told BBC News on Wednesday night that nurses at the hospital knew about his behaviour and did not welcome his visits.

He began volunteering as a porter there in the 1970s and had free use of a flat on site while he helped to raise £40 million for its spinal injuries centre.

Police said Savile had a “predilection” for young girls and that his offending was on a “national scale” and went on for four decades.

Officers are in contact with Stoke Mandeville and Leeds General Infirmary hospitals, where he did charity work and volunteered, about the possibility that he abused patients there as well as in his BBC dressing room. He is also said to have preyed on girls from Duncroft Approved School in Surrey and the Haut de la Garenne children’s home in Jersey.

Staff at the Buckinghamshire hospital were said to have told girls on the children’s ward to “pretend to be asleep” during his visits.

As the scandal continued to grow on Wednesday, it emerged that nine police forces, from Tayside and Cleveland down to Surrey and Jersey, have received reports of sex abuse involving Savile.

The chairman of the BBC Trust, Lord Patten of Barnes, admitted that Savile, whom Scotland Yard described as a “predatory sex offender”, may not have acted alone and raised the prospect that the corporation may have to make an on-air apology for not stopping him.

Savile is thought to have molested girls in his dressing room at the BBC and preyed on vulnerable young people in approved schools, children’s homes and at the hospitals where he worked as a volunteer porter and fund-raiser.

The new evidence prompted renewed claims that senior figures at the BBC must have heard the rumours about one of its star performers, and should have taken action years ago.

Rob Wilson, the Conservative MP for Reading East, said: “The scale of the allegations against Sir Jimmy Savile is staggering. I have spoken to a number people who worked within the BBC in the 1980s and they tell me that Savile’s behaviour was common knowledge within the corporation. If this was the case, did any senior manager look into the rumours? If they did not, why not? My big concern is that the BBC had a misogynist culture, where younger women in particular were not treated as equals and incidents of sexual harassment and groping were not uncommon.

“The BBC has been dragging its feet ever since this story broke and it is causing it enormous reputational damage. The BBC needs to begin an independent inquiry into the culture and management of the organisation so that license payers can have faith that noting uncomfortable for the corporation will be covered up or swept under the carpet.”