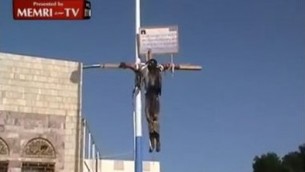 The Washington, DC-based media watchdog said the man had been crucified by Al-Qaeda-affiliated Ansar Al-Shari’a for allegedly directing US drones targeting terrorists in Yemen. It said the YouTube clip was posted on Monday.

The victim was crucified on an electric pylon in south Yemen’s Abyan province.

A sign above the man’s head showed the flag of the Al-Qaeda-linked group and text from verse 5:33 of the Koran: “The recompense of those who wage war against Allah and His Messenger and do mischief in the land is only that they shall be killed or crucified or their hands and their feet be cut off from opposite sides, or be exiled from the land. That is their disgrace in this world, and a great torment is theirs in the Hereafter.”