Sweden: The Violence Is «Extremely Serious» 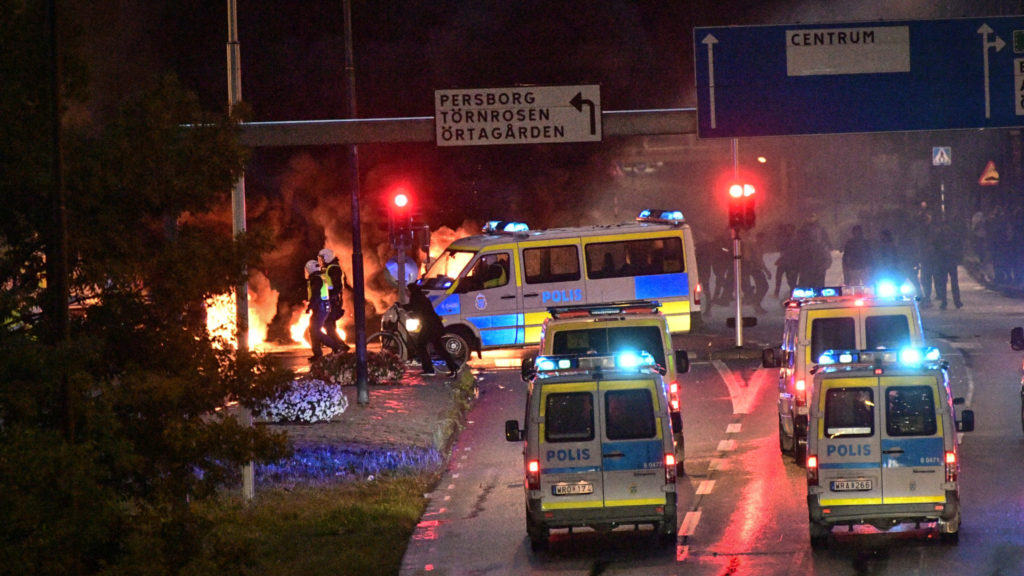 Things in Sweden have now deteriorated to such a degree that on August 29, the Swedish police published a statement titled «The trends in violence are extremely serious.» It said:

«Recently, there have been serious incidents and serious acts of violence linked to criminal networks, in which several people have been murdered and others seriously injured…

«In Stockholm, two people were murdered in the past week, and in Gothenburg, criminal groups have tried to demonstrate power by controlling vehicles entering certain districts. Earlier in August, an innocent 12-year-old girl was murdered… [during a gang incident], and in other parts of the country there are conflicts between various criminal networks and other ruthless crime, as well. On Friday night, a violent riot also occurred in Malmö where several police officers were injured…»

Sweden’s National Police Chief, Anders Thornberg, made what sounded like a plea for help from the rest of society: «Swedish police are in a tough operational situation. It is now a matter of society joining forces behind the police,» he said.

«We will continue to fight organized crime with all the tools we have available. Other good forces in society, everything from municipal officials and civil society to law enforcement agencies and not least the general public, also need to focus on facing the current situation. The police must ensure that the criminals are arrested and can be prosecuted. The criminals need to disappear from our streets and squares so that no more ruthless crimes are committed…

«The everyday life many police officers face when they go to work right now is worrying and very tiring. We work intensively, around the clock, despite this, the severe violence continues. The police are there 24 hours a day, 365 days a year. We do not give up and we do not back down, but the situation is currently very stressful.»

The police statement did not mention that two boys were raped, tortured and nearly buried alive in a cemetery close to Stockholm. The atrocity added to the growing number of so-called «humiliation crimes«. These are crimes where the victim is not only robbed, but also violently humiliated to demonstrate the power of the perpetrator. Another such humiliation crime, for instance, took place in Gothenburg in October 2019, when a criminal gang forced their victim to kiss the gang leader’s feet, while they filmed him. After that, they stomped on his face until he lost consciousness.

«Sweden is losing control of its own territory,» Ivar Arpi, a Swedish columnist, recently told the Danish newspaper Berlingske Tidende.

«These heinous crimes and humiliations are connected to a ghetto culture… Journalists do not like to write about it, politicians do not want to talk about it and researchers do not want to touch it. There is a systematic ignorance.»

In the riot that took place in Malmö on August 28, an estimated 300 people burned car tires, shot fireworks and threw stones at the police. The riot occurred close to Rosengård, a so-called «vulnerable area», populated mainly by immigrants. Video footage posted to social media showed the rioters shouting «Allahu Akbar» and «Jews, remember Khaybar, the army of Mohammed is returning» — a reference to the massacre of the Jews of Khaybar by the Islamic prophet Mohammed and his followers in the year 628, in what is today Saudi Arabia. The Official Council of Swedish Jewish Communities released a statement in reaction to the riot, saying:

«Unfortunately, this is not the first time a crowd has chanted similar threats against Jews in Malmö. The Council of Swedish Jewish Communities takes this incident extremely seriously and calls on the police and other responsible authorities to prosecute those individuals who have thereby committed incitement against an ethnic group.»

According to Swedish media, the riot was a reaction to the burning of a Koran earlier in the day in one part of Malmö and the kicking of a Koran in a central square in the city by followers of the small Danish anti-Islam party, Stram Kurs. The leader of the party, Rasmus Paludan, has previously toured Denmark with his anti-Islam protests.

Paludan’s demonstrations frequently feature a «Koran stunt.» In it, he either throws a Koran around, burns it or puts bacon on it. Dan Park, a Swedish street artist, who has been convicted of inciting hatred against an ethnic group, had invited Paludan to Malmö to participate in a demonstration. Paludan was stopped at the Swedish border and denied entry by Swedish police, who told him that he was banned from entering the country for two years.

«We believe that his actions and freedom of entry would be a threat to fundamental societal interests,» said Mattias Sigfridsson, Malmö’s Acting Police Chief. Asked whether the decision did not go against the freedom of expression, Sigfridsson said:

«We see it as the opposite. We do our utmost to protect the democratic values ​​that exist. The public gathering for which we have denied permission today would have been a danger to safety and order at the event».

«I think it is those who react to what I do, who constitute a threat,» Paludan told Swedish media. The decision to ban Paludan’s demonstration was upheld by the Swedish Administrative Court. It held that while the freedom of assembly and demonstration are constitutionally protected rights and that there is therefore a very limited scope to refuse permission to demonstrate, the threat from the demonstration was so serious that it justified banning him. The Koran burning that ensued despite the police decision happened in contravention of the ban. Three people were arrested and charged with incitement, reportedly for kicking around a Koran in central Malmö.

In the Gothenburg suburb of Angered, a criminal gang set up roadblocks and manned them with masked armed men who checked the identities of people driving in and out of the area. According to Berlingske Tidende, the roadblocks were set up by a gang centered around the Ali Khan family, who deal in financial fraud and other crimes. The clan has been reported to the police more than 200 times but the police have had to close almost all cases because the gang threatens the victims and witnesses to stay silent.

Also recently in Gothenburg, a teacher at the Lövgärdes School reported two armed men moving around outside the school and notified the police, but by the time they arrived the men had disappeared. When the teacher drove home from school later that day, he was kidnapped and beaten.

The leader of the main Swedish opposition party, Moderaterna (The Moderate Party), Ulf Kristersson, now says that he wants to make it a crime to be member of a gang.

«Several children have died only this year in stabbings and shootings,» Kristersson wrote in a Facebook post.

«This weekend, two boys were subjected to terrible atrocities in a cemetery in Solna for an entire night. On Tuesday, a teacher in Gothenburg was kidnapped and beaten after contacting the police.

«What we now experience almost daily is not normal — not for Sweden or for Europe. Almost all of us who live here know that. The development is destroying Swedish trust and cohesion, the violence is threatening the system. The criminal gangs terrorize entire residential areas and kill children and adults who happen to be in the way. They set up their own roadblocks and control people’s everyday lives. They are like Sweden’s domestic terrorists — and must therefore be met with the full force of our democracy. Pattern-breaking measures that really lead to change, not just adjustments in the margin.

«Sweden should start by making it a crime to be part of a criminal gang, in the same way that it should be a crime to be part of a terrorist organization. It would thus give the police new opportunities to act against the activities we have seen in Gothenburg in recent days, such as establishing roadblocks or arranging meetings in which various criminal gangs participate.»

In other news, the Västra Skrävlinge church in Malmö was recently vandalized seven nights in a row. Windows were smashed and statues broken, including a statue of Jesus that was smashed to pieces. The perpetrators are unknown, but the Sweden Democrats Party in Malmö has asked the Church of Swedish to look deeper into the matter, adding in a statement:

«Considering the vandalism of Västra Skrävlinge Church that we have seen and the systematic vandalism we see in our cemeteries, this is an area that the Church of Sweden must work with. Unfortunately, there is a grudge against Christian culture among certain groups and the Church of Sweden in Malmö cannot be passive while the Christian cultural heritage is vandalized.»