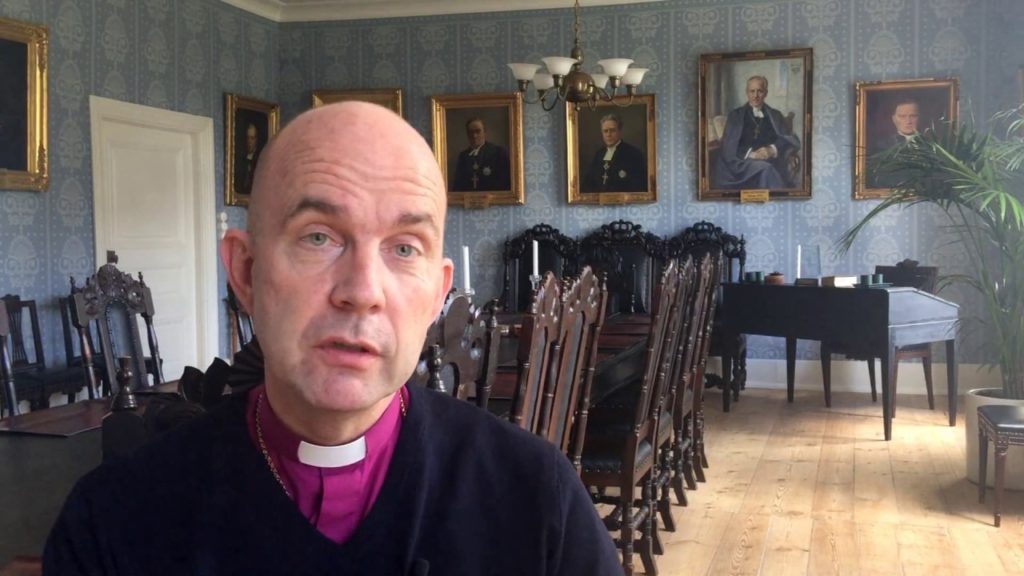 Bishop Fredrik Modeus of the city of Växjö

In 2017, a Swedish police report, «Utsatta områden 2017«, («Vulnerable Areas 2017», commonly known as «no-go zones» or lawless areas) showed that there are 61 such areas in Sweden. They encompass 200 criminal networks, consisting of an estimated 5,000 criminals. Twenty-three of those areas were especially critical: children as young as 10 had been involved in serious crimes there, including ones involving weapons and drugs. Most of the inhabitants were non-Western, mainly Muslim, immigrants.

A new report«The Relationship with the Judiciary in Socially Vulnerable Areas» from BRÅ (Brottsförebyggande Rådet), the Swedish Crime Prevention Council, shows that more than half of the inhabitants of these areas — around 500,000 people — think that criminals affect people in the areas by scaring people from appearing as witnesses, from calling the police, from moving freely, and from intervening when witnessing vandalism. Residents fear repercussions from the local criminals, not only against themselves but also against family members.

According to BRÅ, «Silence has become an established norm in certain groups of inhabitants» in these areas. The new report also notes the existence of parallel legal systems. 12% of the people living in these areas said that there is pressure from relatives and religious communities not to contact authorities, but to use instead local alternative systems, such as the mosque. Sometimes, the local criminal gangs even tell the residents to call them, instead of the police, to minimize the presence of police in the area. These alternative systems appear to handle all crimes that have to do with «reputation» and «honor» but also deal with other crimes, such as blackmail and theft. Relationship issues, including divorce and child custody, are also often handled by the local mosque. BRÅ points out that these alternative systems are often «markedly patriarchal», disadvantaging the rights of women and children.

Since 2005, when the last such document was published, BRÅ, which is responsible for crime statistics in Sweden, has refused to release data about the ethnic identity of criminals. Nonetheless, Swedish newspaper Expressen recently published a reportthat out of 32 gang rape cases adjudicated in 2016 and 2017, 42 of the 43 of the rapists were migrants or descendants of migrants; 32 had been born abroad. 10 were born in Sweden, with one or both parents born abroad. The men were on average 21 years old at the time of the crime, and 13 of them under 18.

Accordingto Stina Holmberg, the investigative and research counsel at BRÅ, there is no urgent need for a new study on migrant crime, although the last such study that BRÅ did was in 2005. What is needed now, according to Holmberg, is the «integration» of migrants, which she believes will end the crimes. According to her, the 42 migrants guilty of gang rape are a negligible part of all migrants, in relation to the 163,000 migrants who applied for asylum in 2015.

In February, Peter Springare, a Swedish police officer, saidthat gang rapes were a new cultural phenomenon in Sweden — a consequence of the last 10 to 15 years of immigration policy.

«There are also ethnic Swedes engaged in gang rape , but not in the same numbers as foreign-born offenders,» Springare said. For those comments, Springare was reported to the police, who announced that they would conduct an internal investigation into his remarks. The Secretary General of Sweden’s Law Society, Anne Ramberg, saidthat Springare’s comments were «almost racist». If it is considered ‘objectionable’ in the West to talk about about the factual consequences of migration, in Sweden it is now viewed as a crime.

The Swedish government, however, seems undeterred by the risks of more potential gang rapes and migrant crimes. It has proposed legislation that will allow 9,000 unaccompanied and mainly male minors — approximately 7,000 of whom have reportedlyturned out to be older than 18 and are thus not minors at all — who have had their asylum applications rejected, and who should have been deported, to get temporary residence permits in Sweden, if they plan to attend high school or are already enrolled in one. Notably, even those among the 9,000 whose identities are unverified — presumably because they have no papers — will be allowed to stay.

Both the police and the Swedish migration courts have heavily criticizedthe legislation, especially as it breaks with Swedish law, which requires people who want to stay in the country to be able clearly to identify themselves. Lowering this requirement reduces the ability of the Swedish authorities to know who is living in the country.

In response, the government has arguedthat the proposal is about allowing the 9,000 migrants to finish or apply for a high school education and not about asylum. So, it suddenly turns out that the 9,000 male migrants did not come to seek asylum, but to acquire a Swedish high school education. Who knew? Why grown men of unverifiable identity and from foreign countries should be allowed into Swedish high schools remains unanswered. Allowing the 9,000 ‘minors’ to stay is expected to costthe Swedish state nearly two billion kroner [$238 million; almost 200 million euros] in 2019 alone.

Bishop Fredrik Modeus of the city of Växjö has arguedthat Sweden should «reintroduce the possibility of residence permits in special and particularly devastating circumstances», and that Sweden should view itself as a «humanitarian superpower»: «Allow the unaccompanied youth to stay. Not temporarily but permanently,» he said.

The mosque in Bishop Modeus’s city recently applied for permission publicly to broadcast its calls to prayer from a loudspeaker for three minutes, twice on Fridays. There are already two mosques in Sweden that publicly broadcast their prayers on Fridays, one in Botkyrka— where permission was granted in 2013 — and one in Karlskrona. The local Muslim leader, Imam Ismail Abu Helal, has said the call to prayer would enable Muslims to integrate betterinto Swedish society. «I welcome the application and look forward to hearing both church bells and prayer announcements in our city», Bishop Modeus said.

Prime Minister Stefan Löfven refusedto state an opinion on the matter of the Muslim call to prayer. He said that it «depends on the location of the mosque» and that it is up to the local municipality. In May, Växjö police decidedthat the mosque will be allowed to call to prayer every Friday for three minutes. In its decision, the police statedthat the assessment had been based on traffic considerations, public order and safety. «No other aspects had been taken into account, such as the content of the call for prayer. Bishop Modeus saidthat the police’s decision was wise and would benefit integration».

The kind of ‘integration’ that the mosque in Växjö is reportedlyspreading to the local Muslim inhabitants is that Muslims are urged not to participate in the Christmas celebration of «kuffars» [a derogatory term for ‘disbelievers’], and Jews are, of course, mentioned as the enemies of Allah. The mosque’s school uses Saudi Arabian school curricula, and encourages women not to dress in ‘Western clothes’ but to teach their daughters to ‘dress decently from childhood’.

It increasingly appears, therefore, that it will be Sweden that integrates into Islamic culture. Recently, a Swedish court ruledin accordance with principles aligned with sharia law, when the jury — which had two Muslim members — found that a woman who had been violently abused by her husband could not be trusted because she came from a ‘lesser family’ than her husband and that it was «common» for women to lie about abuse. The jury also berated her for having involved the police, instead of solving the issue by consulting her abusive husband’s family. The case caused a scandal in Sweden and the two jury members were subsequently dismissed.

In another recent case, a 12-year-old Swedish Muslim girl was forcibly taken to Iraq and forced to marry her 22-year-old cousin, who reportedly raped her; after she returned to Sweden, she gave birth to twins. Her family forced her to return to Iraq to live with her ‘husband.’ His family then forcibly took her children away after finally agreeing to let her have a divorce. The children are still in Iraq. The Swedish court gave this man, an Iraqi citizen, custody of their now 10-year old twins.