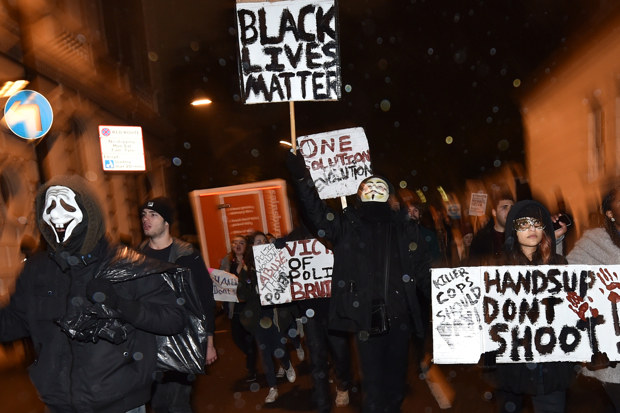 A couple of weeks ago I watched a ‘Black Lives Matter’ protest in the centre of London. It was a Sunday and the assembled group of perhaps 1,000 people marched up and down Oxford street a couple of times. This was shortly after the shootings of five police officers in Dallas, Texas while they policed a protest there.

The sight of this American movement coming to London was not without its comic side. The crowd of mainly black young British people chanted a range of things, including ‘Hands up, don’t shoot’ (one of the group’s hallmark chants ever since these were erroneously claimed to be the final words of Michael Brown, shot by a police officer in Ferguson Missouri in 2014). Watching these young British people shouting ‘Hands up, don’t shoot’ as they were escorted along the centre of London by unarmed British policemen showed a striking lack of self-awareness. The black-power salutes were slightly less amusing. When one young man clambered onto a bus-stop to lead the crowd in black-power salutes one got the sense that this is how trouble starts.

As it happened, I had just come from a television studio where we had been discussing the killing of the police officers in Dallas and the troubling anti-police and indeed racist rhetoric on the not-so-far fringes of the Black Lives Matter movement. It was my argument, after Dallas, that everybody needed to simmer things down a notch. I said all this fully conscious of the fact that there is a type of person out there today who thinks that the colour of your skin, your sex and indeed your comparable variety of ‘privilege’ are the only things that matter in any such discussion these days. But I stick by my not terribly original sentiment. At a time when some young black people are being shot by some police and some young black people are shooting black and white police officers it seems to me that it behoves any movement to be careful. Particularly to be careful before leaping on every exchange between the police and any member of the public. It behoves everyone to weigh up the evidence in each case and not use killings as a megaphone for their political views or violence as any kind of legitimate force in politics.

On Tuesday night on the hottest night of the year in London, a large crowd gathered in Hyde Park. Some members of the crowd began chanting Black Lives Matter slogans. This culminated in a police officer being stabbed and four other PCs being injured. One young man was set upon in the middle of a busy London street by a gang of three other men wielding a machete. There were a number of other injuries among the crowd. This has all gone by with a surprising lack of comment, despite being the most serious unrest in the capital since the 2011 riots.

But it ought to serve as a reminder of how violence spreads. Whatever the situation in America – a situation to which Black Lives Matter began as a response and finished by inflaming – the situation in the UK is utterly different. But lie to people about their circumstances and whip people up into a state of grievance and almost anything is possible. We are lucky enough not to have any severe racial problems in the UK. I hope Britain will ensure that a small number of activists in search of a grievance aren’t going to change that.