The strikes at a training facility called Camp Raso, about 120 miles north of Mogadishu, came as the Shabab fighters were nearing the end of “training for a large-scale attack” on forces belonging to the African Union in Somalia, officials said.

They were bombed during what United States officials said they believed was a graduation ceremony, and the warplanes dropped a number of precision-guided bombs and missiles on them. “They were standing outdoors in formation,” one official said.

The latest strikes come as East Africa analysts say that the Shabab, the group responsible for the 2013 attack on the Westgate mall in Kenya, is making a comeback after American strikes killed the group’s top leadership in 2014. Last month, the Shabab claimed responsibility for an attack on a popular hotel and a public garden in Mogadishu that killed 10 people and injured more than 25 others.

In the past two months, Shabab militants have killed more than 150 people, including Kenyan soldiers stationed at a remote desert outpost and beachcombers in Mogadishu. In addition, the group has claimed responsibility for a bomb placed aboard a Somali jetliner that tore a hole through the fuselage. 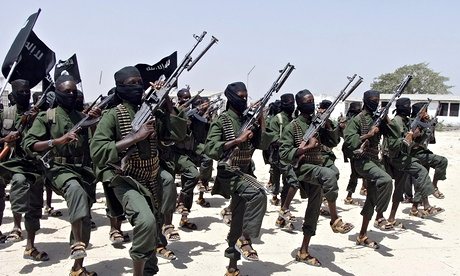