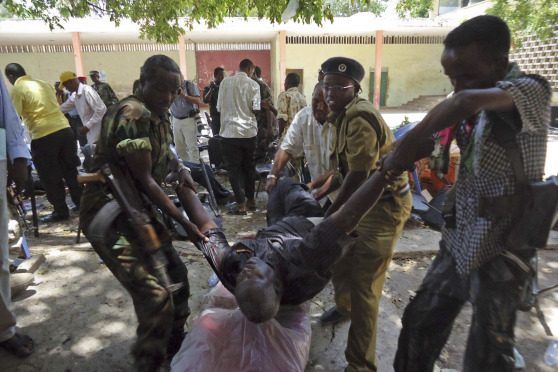 It was supposed to be a symbol of hope: The newly reopened National Theater in Mogadishu was the most potent sign of the peaceful change that has swept the Somali capital since Al Shabab militants fled the city in August.

It turned into a scene of bloody chaos Wednesday when a bombing killed 10 people. The attack apparently was aimed at assassinating Prime Minister Abdiweli Mohammed Ali, who was attending a ceremony with many officials of his Western-backed Transitional Federal Government, or TFG.

Al Shabab claimed responsibility for the attack, boasting in a tweet that the «large explosion brings the show to an end leaving scores of MP’s (sic) TFG officials and intelligence personnel dead.» Both sides in the conflict tend to exaggerate casualties caused by their attacks.

Ali told a news conference after the bombing that a female suicide bomber triggered the blast. A witness gave a similar account to The Times.

«The explosion blasted as I was speaking at the microphone,» the prime minister told reporters. He said the minister for planning, Abdullahi Godah Barre, sustained minor injuries when he was hit in the neck by shrapnel.
..
Sahro Ahmed, a witness, told The Times he noticed a young, anxious woman in dark clothing sitting behind him in the theater.

«Everyone was happy, but she looked so worried as she was sitting behind me,» he said. Shortly afterward, he said, he saw her move to a seat at the front of the theater. «A few minutes later a big explosion went off in the area where she was, and her body was scattered in pieces.»

Another witness, Amina Salah, said some people were dazed and in shock after the blast, while others helped police rescue the wounded and collect bodies.

«It was gruesome scene,» she said. «Bodies were lying in the theater as blood dripped down the stairs.»

The theater, a looming concrete edifice, closed down when Somalia slid into civil war and reopened only last month.