IS planlegger opprør i Sør-Europa 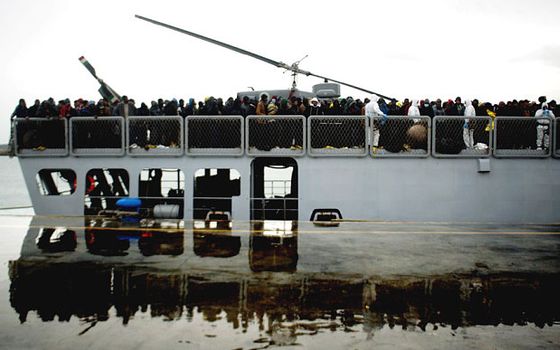 Islamic State militants are planning a takeover of Libya as a «gateway» to wage war across the whole of southern Europe, letters written by the group’s supporters have revealed.

The jihadists hope to flood the north African state with militiamen from Syria and Iraq, who will then sail across the Mediterranean posing as migrants on people trafficking vessels, according to plans seen by Quilliam, the British anti-extremist group.

The fighters would then run amok in southern European cities and also try to attack maritime shipping.

The Isil propagandist, who uses the alias Abu Arhim al-Libim, describes Libya as having «immense potential» for Isil. He points out with relish that it is awash with weapons from the Libyan civil war, when large quantities of Col Gaddafi’s arsenals were appropriated by rebels. Some of those weapons came from Britain, which supplied the Gaddafi regime with machine guns, sniper rifles and ammunition during his final years in power, when he was seen as an ally against Islamist terrorism.

Mr Libim also points out that Libya is less than around 300 miles from parts of the nearest European mainland.

He writes: «It has a long coast and looks upon the southern Crusader states, which can be reached with ease by even a rudimentary boat.»

He also cites «the number of trips known as ‘illegal immigration’ from this coast, which are huge in number … if this was even partially exploited and developed strategically, pandemonium could be wrought in the southern European states and it is even possible that there could be a closure of shipping lines and targeting of Crusader ships and tankers.»

The propagandist’s comments come amid growing concerns in the West about the collapse of security in Libya, which has a large diaspora population in the UK.

Italy’s interior ministry estimates that at least 200,000 refugees and immigrants are poised to make the crossing from Libya to Sicily or the tiny island of Lampedusa, Italy’s southernmost territory.

Last year more than 170,000 arrived in Italy by boat, including tens of thousands of Syrians fleeing the civil war in their home country.

Search and rescue efforts entered a dangerous new phase this week when an Italian coast guard vessel rescuing migrants 50 miles off the Libyan coast was threatened by smugglers armed with Kalashnikov assault rifles.

While the gang were concerned only with retrieving their boat for another smuggling trip, the incident demonstrated the potential threat were Isil to adopt similar smuggling tactics.

Nasser Kamel, Egypt’s ambassador to London, warned Britain brace itself for ‘boats full of terrorists’ unless action was taken in Libya. He spoke after 2,164 migrants were rescued at sea in a 24-hour period over the weekend in what has been described as an ‘exodus without precedent’.

«Those boat people who go for immigration purposes and try to cross the Mediterranean … in the next few weeks, if we do not act together, they will be boats full of terrorists also,» he said.