Last year when Libya still looked like it might be okay I planned my second visit. It would have been my first since the overthrow of Moammar Qaddafi.

An American journalist who lived in Benghazi emailed me and said we should meet for coffee once I arrived. I liked the idea, partly because he could show me around and introduce me to people, but mostly because I would not be alone in a strange and potentially dangerous city. No one, not even war correspondents, enjoys being alone in such places.

Then several governments, including our own, ordered its citizens out. Westerners headed for the exits and European airlines stopped flying to Tripoli. I had no choice but to cancel my trip. Nothing much bad was happening at the time, but several foreign intelligence agencies, including the CIA, concluded that something horrible was likely to happen and that people like me had to clear out of the way.

I didn’t know what, exactly, they were worried about, which only made my own anxiety worse. What I dreaded more than anything was being kidnapped. I’ve risked getting shot and blown up in a number of different war zones, but I will not go to a place where I stand a serious chance of being grabbed by terrorists. I decided long ago I would let would-be kidnappers shoot me in the street before I’d get in a car with them even at gunpoint.

So I cancelled my trip to Libya and went to Lebanon instead. Knowing I had a colleague and a friend-to-be waiting in Benghazi wasn’t enough. There is safety in numbers, sure, but we journalists can only do so much to protect each other. He seemed disappointed, but he too ended up leaving Libya and went to, of all places, Syria. 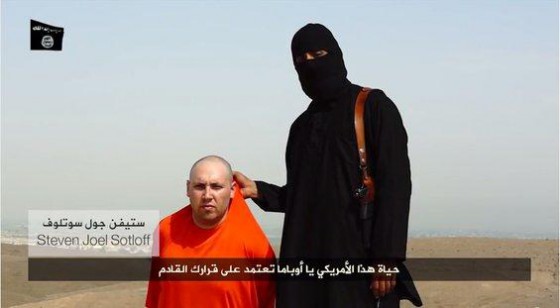 His name is Steven Sotloff. And he was kidnapped last August by ISIS. Last weekend ISIS executed our colleague James Foley on camera and said Sotloff is next. Sotloff appears in the video too and personally witnessed Foley’s beheading.

I never met him, but now I can’t stop thinking about him and worrying about him. Sometimes it makes me physically sick. We were going to meet in Benghazi. I’m sure we would have become friends. We have friends in common already and, believe me, hanging out with colleagues in dangerous places is a bonding experience. He published a few articles in this very magazine because I introduced him by email to the editors and the publisher.

Apparently ISIS demanded 132 million dollars in ransom money from Foley’s family before killing him—an impossible amount. The government could pay it, of course, but will not. Rewarding kidnappers only encourages more kidnappings and puts even more people at risk.

Instead the US military tried to rescue Foley, Sotloff, and other so-far unnamed journalists who are supposedly being held. The operation didn’t work out. The victims were at another location.

Washington can’t pay ransoms, but it could and probably should offer a large cash reward for intelligence that leads to a successful rescue. Kidnappers might try to collect the reward money themselves, which would make it a ransom by other means, but there’s an easy way around that—kill all the kidnappers. Do not arrest them and send them to Guantanamo. Kill them.

I have no doubt Washington is looking for Sotloff and the others right now. They’ll send men if they think they know where he is. They’ve already tried at least once. We can only hope they’ll succeed before it’s too late.

In the meantime, to all of my colleagues: for God’s sake, stay the hell out of Syria.