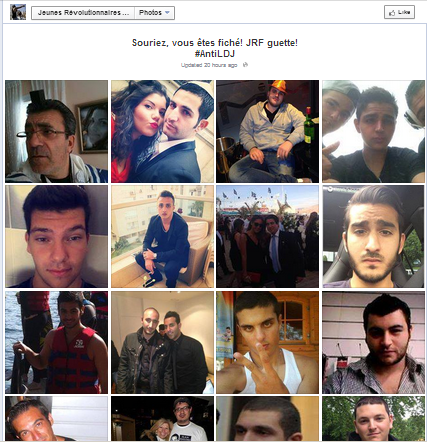 A violent mob of more than a dozen men in France assaulted a Jew at his home in a Paris suburb after confirming that his photograph had been published by a French Facebook page identifying Jews to be targeted for physical intimidation, The Union of Jewish Students of France, the UEJF, said in a statement on Friday.

The Facebook page, ‘Jeunes Révolutionnaires Français’, JRF, or ‘Young French Revolutionaries’, posted the names and photos of 32 Jews. The assault on one of those listed took place on Thursday night in Bobigny, Seine-Saint-Denis, a Paris suburb. The assailants were armed with iron bars.

On Facebook, Cohen wrote, “An anti-Semitic page is publishing names and pictures of French Jews in order to target them physically! A few have already been attacked at their homes, one last night by 15 people on one Jewish guy. We need to remove this page!”

The JRF captioned its page with the photos of the Jews to be targeted, “Smile, you’re caught! JRF watches! # AntiLDJ,” referring to the LDJ, the French initials of the Jewish Defense League, an organization created to teach Jews how to defend themselves from anti-Semitic attacks.

The title page of the group’s Facebook presence features a large Palestinian flag and calls for members to attend a rally on Saturday in connection with the international Al Quds Day protests around the world where police are preparing for violence against Jews.

The UEJF said three men went to the victim’s house and asked him, “Are you the guy in the photo on Facebook?”

They then said they were there to “break the Jew” and do to him “the same as Ilan Halimi,” a 23-year-old who was kidnapped and tortured for 24 days by a gang led by Youssouf Fofana, described by The Jewish Chronicle as, “the extraordinarily cruel, Paris-born fifth of seven children of immigrants from the Ivory Coast.”

Halimi was found naked, handcuffed and bound to a tree near a railway station in February, 2006, and his body had been mutilated. Still alive, he died on the way to hospital. Halimi’s murder was made into a movie by French Jewish film director Alexandre Arcady entitled, 24 jours: la vérité sur l’affaire Ilan Halimi, or “24 Days: The Truth About the Ilan Hamili Affair,” inspired by a book with a similar title written by the victim’s mother, Ruth.

In Bobigny, after they confirmed him to be the Jew in the photo, the three men were joined by 15 more, armed with iron bars, who assaulted the victim, the UEJF said. When another resident in the building appeared, the men fled the scene.

The UEJF said: “For several days, many Facebook pages have been created to encourage physical violence against young Jews. Photos were published, with the identities, phone numbers, and contact information. This young man was directly affected by such a Facebook page. It is unacceptable that the Jews are the target of Facebook calls to murder.”