EU citizens continue to travel to conflict zones to receive training in combat techniques and to engage in armed struggle. The numbers of EU citizens travelling to Syria in particular, including those intending to fight alongside al-Qaeda-affiliated groups, were already substantial and rising, and increased significantly in 2013. It seems likely that Syria will remain the destination of choice for prospective fighters departing from EU Member States, as long as the civil war there continues. In the wake of the Syrian conflict, the threat to the EU is likely to increase exponentially.

European fighters, who travel to conflict zones, are assessed as posing an increased threat to all EU Member States ontheir return. They may seek to set up logistical, financial or recruitment cells, and may act as role models to individuals within extremist communities – further enhancing their
capacity to encourage others to travel. In addition, their resolve is likely to have strengthened in the conflict zones, and they may have gained the skills and contacts to carry out attacks in the EU. 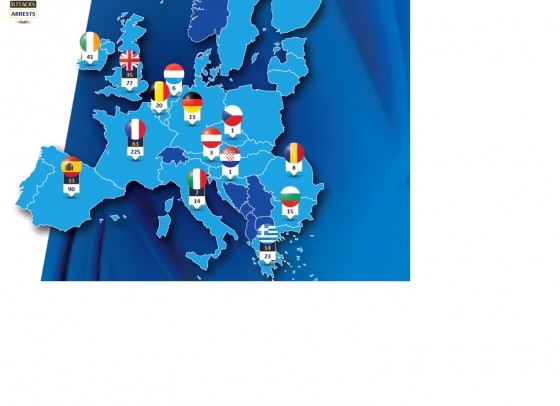 «The threat from terrorism in Europe remains strong, manifesting itself in various forms and driven by diverse motives. There is a growing threat from EU citizens who, having travelled to conflict zones to engage in terrorist activities, return to the European Union with a willingness to commit acts of terrorism. This was especially evident in the case of Syria in 2013. This phenomenon adds a new dimension to the existing threat situation in the European Union, since it provides new groups within Member States with both terrorist intentions and capabilities, which may result in terrorist attacks with unexpected targets and timings,» says Rob Wainwright, Director of Europol.