But after a week of wildly fluctuating theories, the admission by Malaysia’s prime minister yesterday that the plane had been deliberately re-routed and flown for hours with communication systems switched off to disguise its flight path provided the most significant clues yet as to what might have happened. Mr Najib stopped short of confirming Flight MH370 had been hijacked.

Mr Najib said in a press conference: “Based on new satellite information, we can say with a high degree of certainty that the Aircraft Communications Addressing and Reporting System was disabled just before the aircraft reached the east coast of Peninsular Malaysia. Shortly afterwards, near the border between Malaysian and Vietnamese air traffic control, the aircraft’s transponder was switched off. From this point onwards, the Royal Malaysian Air Force primary radar showed that an aircraft which was believed – but not confirmed – to be MH370 did indeed turn back. It then flew in a westerly direction back over Peninsular Malaysia before turning northwest.” 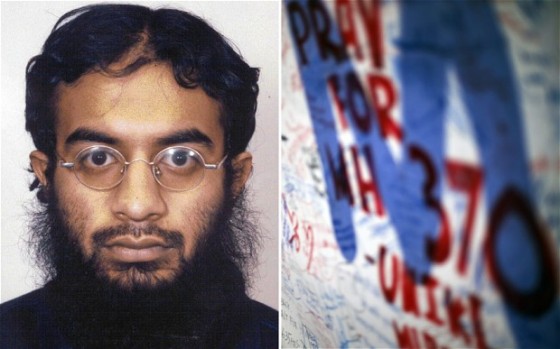 In evidence in a court case last Tuesday, Saajid Badat, a British-born Muslim from Gloucester, said that he had been instructed at a terrorist training camp in Afghanistan to give a shoe bomb to the Malaysians.

Giving evidence at the trial in New York of Sulaiman Abu Ghaith, Osama bin Laden’s son-in-law, Badat said: “I gave one of my shoes to the Malaysians. I think it was to access the cockpit.”

Badat, who spoke via video link and is in hiding in the UK, said the Malaysian plot was being masterminded by Khalid Sheikh Mohammed, the principal architect of 9/11.

According to Badat, Mohammed kept a list of the world’s tallest buildings and crossed out New York’s Twin Towers after the September 11, 2001 attacks with hijacked airliners as “a joke to make us laugh”.

Badat told the court last week that he believed the Malaysians, including the pilot, were “ready to perform an act.”

During the meeting, the possibility was raised that the cockpit door might be locked. Badat told the court: “So I said, ‘How about I give you one of my bombs to open a cockpit door?’ ”

The disclosure that Malaysians were plotting a 9/11-style attack raises the prospect that both pilots were overpowered and the plane intended for use as a fuel-filled bomb. One possible target, if the scenario is correct, will have been the Petronas Towers in Kuala Lumpur, a symbol of Malaysia’s modernity and the world’s tallest buildings from 1998 until 2004.

Prof Anthony Glees, director of the University of Buckingham’s Centre for Security and Intelligence Studies, said the prospect of an Islamist plot offered one explanation for why the Malaysian authorities “have not been telling us the whole truth”.

Prof Glees said: “I believed this was a hijacking as soon as we were told that the plane had altered its flight path.

“Evidence that it turned back to Malaysia means that this could easily have been a Malaysian Islamist plot to turn the plane into a 9/11-style bomb to fly it into a building in Kuala Lumpur.

“Now we know there is evidence of a Malaysian terror cell with ambitions to carry out such an attack and so this makes it even more credible.”

Prof Glees added: “Islamist terrorists in Malaysia present the country with a really serious political problem. The global repercussions of another 9/11 attack, including grounded aircraft and stock markets crashes, is something no government would want to face.”

James Healy-Pratt, head of aviation at Stuarts Law solicitors, said the lack of information from Malaysian authorities was in stark contrast to the reaction of French officials when an Air France plane – whose black box was not recovered for two years – crashed in the Atlantic in 2009. The lack of information suggested Malaysian authorities may have something to hide. 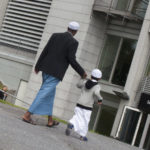