Saturday, another suicide bomb hit the town, this time three died and 23 were wounded. The attacks are inflaming sectarian anger. Shia opinion in the Bekaa Valley is hardening — as it is in south Beirut, which has been blasted by a series of bombs since July, the latest on January 21 killing five and wounding hundreds. 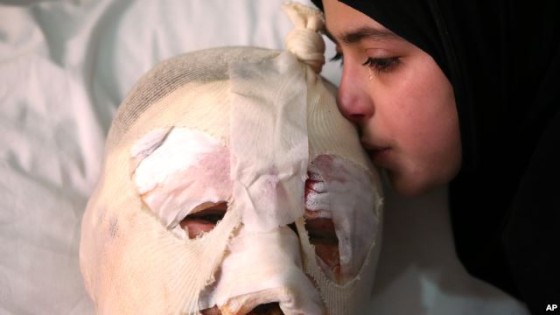 Two weeks ago, the town of Hermel, a Shia Muslim community in the Bekaa Valley close to the Syrian border, was struck for the first time in its history by a suicide bomber.  The explosion killed five people and wounded another 40.

Thirty-year-old Amel Mourkada was working in a photo shop and at first thought the blast was a gas explosion.

She says she does not remember hearing an explosion, she just remembers everything collapsing on her.

Mourkada nearly lost an eye, her nose was fractured in three places and her right hand permanently damaged. She is now recovering.

She says those responsible for the attack do not know God or religion or anything at all.

When young Lebanese Shia fighters started to return in body bags several months ago, some people in Hermel questioned why Hezbollah was fighting in Syria, arguing the real enemy is Israel.

Mohammed Alaw, a 50-year-old high school teacher, was one of those critics, but says he and many others have changed their minds.

He says all the people who condemned or did not agree with Hezbollah going into Syria have changed their minds because of the criminal acts taking place in many parts of Lebanon, especially in the Shi’ite communities.

And Alaw says many of his older students are joining Hezbollah.

Recently Saad Hariri, the leader of the mainly Sunni March 14th bloc of political parties, offered in principle to enter a national unity government that would include Hezbollah. Many Sunni Muslims were outraged, including Abu al-Bara, a Sunni sheik in Tripoli.

Abu says he and other Sunnis now hate Hariri because he is willing to cooperate despite the deaths of many Sunnis at the hands of Hezbollah.