Asian sex gang: young girls betrayed by our fear of racism
Vulnerable teenagers were abandoned to their abusers because of our society’s nervous respect for their ‘different’ culture. 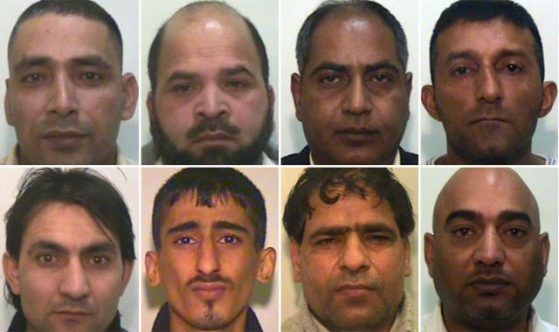 Nine white men are found guilty of grooming young Asian girls, aged between 13 and 15, whom they picked up on the streets of London. The girls were lured with free fish and chips before being raped or pimped as prostitutes. One Asian girl from a children’s home was used for sex by 20 white men in one night. Police insist the crimes were not “racially motivated”.
Imagine if that story were true. Would you really believe that race was not a factor in those hateful crimes? Do you think that, despite conclusive DNA evidence from a girl raped by two men, the police would have hesitated to press charges because the suspects were white and it could make things a bit sensitive in the white community? Would the Crown Prosecution Service have refused to prosecute, allowing the child-sex ring to flourish for three more anguished years?

OK, now let’s try switching the ethnic identities round. Change the fish and chips to kebabs, London to Rochdale, white to Asian and vice versa and you have the case that ended yesterday at Liverpool Crown Court. Nine British Muslim men were jailed for a total of 77 years for rape and trafficking within the UK for sexual exploitation. The whole case made for disturbing reading, but somehow it was the tiny, paralysing details that made it real. Like the fact that one of the convicted men, father-of-five Abdul Rauf, was a religious studies teacher at a local mosque. Rauf asked his 15-year-old victim if she had any younger friends, and drove some of the girls to meet other men, who had sex with them despite knowing they were under-age.

You will already have noticed a lot of embarrassed evasiveness about this disgusting case, particularly on the BBC. Turning a blind eye to appalling, illegal practices because “it’s their culture” is what has brought our country to this obscene pass. I have watched it unfolding since I did my teaching practice in 1982 in Southall, west London. I remember being encouraged to “teach the children their own culture” even as I found myself wondering why British Muslim girls couldn’t be taught the enlightened beliefs of the egalitarian land in which they lived.

When it comes to women’s rights, not all cultures are created equal, particularly those whose attitudes are frozen some time in the mid‑14th century. But we weren’t allowed to say that. Actually, we weren’t even allowed to think that. If you inhaled enough toleration of the intolerable, then you were well on your way to the opium of political correctness.

All those years ago in the classroom, it was clear to me how dangerous it would be if we didn’t insist that newcomers signed up to our social norms. What was going to happen if we were nervous of offending them, not the other way around? This week, over Liverpool, the sky was dark not with rain clouds but with chickens coming home to roost.

Rochdale girls who were living in what is imaginatively known as “care” were recruited into sexual factory farming by Muslim men described as “pure evil” by detectives. The 59-year-old ringleader was banned from court for calling the judge a “racist bastard”. His barrister explained that his client “had objected from the start to being tried by an all-white jury. He believes his convictions have nothing to do with justice but result from the faith and race of the defendants.” In other words, a racist who treats poor white girls as sub-human seriously believes it is he who is the victim of racism, when he is called to account for organising the gang-rape of under-age females. To be fair, it takes 40 years of well-intentioned multiculturalism to achieve that kind of moral mess.

The layers of denial run so deep that it’s important to try to be clear where we can. First, it is an insult to Hindus, Sikhs and decent, integrated Muslims to classify those brutes under the catch-all title of “Asian males”. All but one are Pakistani Muslims who come from a patriarchal peasant culture that obviously regards young white British girls as easy meat. Those children were considered fair game for degrading sexual acts on an almost industrial scale. The men took a calculated gamble that no one gave a damn about the girls. And you know the worst thing? They were right.

The number of adolescents “passed around” like a congenial hookah pipe by the gang is believed to be more than 50. There were 631 documented cases of abuse over a five-year period, and many will have been too afraid to tell their story. Some may not even be alive to tell it. We will never know the full extent of their pain.

Nazir Afzal, Chief Crown Prosecutor for North West England, who at least had the guts to bring the case to court after social workers and the police turned away for fear of being seen as racist, admitted that “imported cultural baggage” played a role in the crimes. That’s the same baggage that brought quaint customs like forced marriages, honour killing and female genital mutilation to these isles.

Crucially, Mr Afzal says that what defined the convicted men was their attitude to the opposite sex. “They think that women are some lesser beings. The availability of vulnerable young white girls is what has drawn men to them… These girls were on the streets at midnight. It made them easy prey for evil men.”

So the case turns out to be a tale of two cultures. On the one hand, we have white girls, raised in a godless, under-parented, over-sexualised society, who have little respect for themselves or their bodies and – even worse – no adults taking responsibility. On the other, we have a different kind of “respect”, the warped creed of a sub-section of unreconstructed, brutally over-parenting men. Their own daughters and young female relatives must not be violated or they will lose their market value, so why not take out your sexual frustration on the despised native slappers instead? It’s as simple as that.

It’s not just the Pakistani men who considered their prey to be beneath contempt. “I think the attitude of the local authorities for many years was that these chaotic girls were not held in very high regard,” explains Simon Danczuk, the MP for Rochdale, choosing his words carefully. “I don’t know if it’s political correctness, but the attitude was, ‘These are the life choices the girls are making’.”

Life choices? Dear God, they were raped for years. One girl left a letter for the staff at her children’s home saying she was being abused. It was ignored. So the poor kid wrote another. It was only when a teacher spotted that one pupil was pregnant and a suspicious number of Asian-looking men were picking her up at the school gate that the alarm was raised.
I spoke to Mr Danczuk yesterday, and he strenuously disputes claims that this is a one-off case, or even a recent phenomenon. The grooming of white girls by a small sub-section of the Pakistani community was being discussed in Blackburn council 15 years ago. Recently, the MP was outraged when male relatives of the accused in a similar child-sex case came to his constituency surgery to ask for support. “They spoke about white women in an exceptionally derogatory way. I nearly threw them out.”

While the majority of Asian men in Rochdale are “extremely respectful towards women”, Simon Danczuk laughs at the view of Keith Vaz that “this was not a race issue”. One can only marvel at the skill of the optician who continues to supply Mr Vaz, the chairman of the Commons’ home affairs committee, with spectacles of ever-rosier hue.

Mr Vaz warned yesterday that blaming a particular race or religion for grooming young girls for sex “risks opening up a Pandora’s box over race relations”. If he would only take off his goggles for a minute he might spot the National Front supporters strutting their rancid stuff outside the Liverpool courtroom. The intimidation of two Asian barristers to the point where, shockingly, they withdrew from the case suggests that the contents of Pandora’s box are swarming all over the place.

What a relief to hear Mohammed Shafiq, chief executive of the Ramadhan Foundation, a moderate Muslim youth group, accusing Pakistani community elders of “burying their heads in the sand” over this poisonous problem. He welcomes police intervention and insists that race is “central to the actions” of the criminals. “They think that white teenage girls are worthless and can be abused without a second thought; it is this sort of behaviour that is bringing shame on our community.”

By now, even the most trusting and generous-minded liberals must have woken up to the fact that our fear of being tarred as racist has allowed ugly practices and outmoded attitudes to flourish, hidden away behind a nervous respect for “difference”. Stymied by political correctness, social workers, carers, police, lawyers and council staff all failed to protect those young Rochdale girls.

They were victims twice over. First, of the despicable men who traded and abused them, and second, of our well-meaning, foolish and deadly desire to avoid the issue of race at any cost. They deserved better.