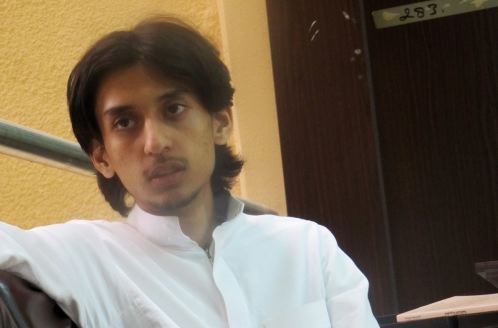 Another reads: “No Saudi women will go to hell, because it’s impossible to go there twice.”

The tweets came to light last week around a celebration of Muhammad’s birthday, and Kashgari’s ordeal began. Hours before he was detained, Kashgari spoke to me by phone from the house in which he was hiding. “I was with sitting with my friends and one of them checked Twitter on his mobile phone,” he said. “Suddenly there were thousands of tweets of people calling to kill me because they said I’m against religion.”

Kashgari posted an apology tweet: “I deleted my previous tweets because after I consulted with a few brothers, I realized that they may have been offensive to the Prophet (pbuh) and I don’t want anyone to misunderstand,” he wrote. But the damage was done. As an electronic lynch mob formed, with users posting to a Twitter hashtag that translates as “Hamza Kashgari the dog,” the regime called for his arrest and trial.

Friends advised him to leave Saudi Arabia immediately. “I never expected this. It was a huge surprise. My friends are writers and bloggers and now their lives are in danger too,” he told me. “They fear what will happen to them. The government is trying to scare them and show that what is happening to me can happen to them sooner or later.”

Kashgari noted with sadness that many young Saudis are leaving their country in hopes of escaping the government’s repressive policies. “It’s not logical that, if someone disagrees with the Saudi government, that he should be forced to leave the country. Many of those who have been arrested are fighting for simple rights that everyone should have — freedom of thought, expression, speech and religion.”

When we spoke Wednesday, Kashgari asked that I not reveal where he was hiding or his plan of escape. Now that he has been detained, his friends hope publicity will build pressure on the Malaysian government not to extradite Kashgari to Saudi Arabia. Karpal Singh, a well-known Malaysian lawyer and member of parliament, is being encouraged to take Kashgari’s case. Former Canadian justice minister Irwin Cotler has offered to serve as Kashgari’s international legal counsel. Cotler has served as legal counsel to such famous dissidents as Nelson Mandela, Saad Eddin Ibrahim, Natan Sharansky and Maikel Nabil. Many have credited him with creating the international pressure that led to their release.

Kashgari encouraged Western nations to support human rights in his country and raise the names of activists under threat. “Pressure alone won’t be enough, but at least it will help people feel that they are not alone,” he said.

The young writer surmised that the threats against him were, in part, a result of the tens of millions of dollars the Saudi king allotted to the religious police last spring. Many Saudi dissidents have noted increased repression in the past few months and are terrified of the ascent of Crown Prince Naif, who has served as interior minister for decades.

The Saudi ambassador to the United Nations, Abdallah Y. Al-Mouallimi, told a packed audience at New York University this week that Saudi Arabia was a “land of opportunity” where there was no oppression of dissidents. I confronted the ambassador with lists of liberals, women and dissidents that had been arrested,beheaded and whipped. When questioned about Kashgari, Mouallimi replied that the journalist “has gone beyond the limits of what is acceptable in society.” His tweets were “not acceptable in a country like Saudi Arabia. This can never be acceptable,” the ambassador added.

“I don’t think I’ll ever be able to return to my homeland,” Kashgari told me hours before he was detained. Now, unfortunately, it looks as if he may returned against his will. If that happens, his fate is all but certain as a blasphemer’s guilt is preordained in the theocratic dictatorship of Saudi Arabia.