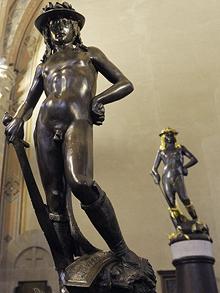 «The David is incomparably more beautiful now than ever before, even though it would seem impossible,» said Beatrice Paolozzi Strozzi, director of the Bargello Museum that hosts the statue.

«We could only intervene now with the newest laser techniques; even the most delicate mechanical procedure would have hurt it,» she said.

The 200,000 euro restoration also involved the polishing of a thin layer of gold that adds lustre to the statue. Donatello’s David is regarded as crucial to the history of Western art because it was the first free-standing bronze nude to be created since the time of the Greeks and Romans.

It created a sensation when it was created, probably in the 1440s. It is considered one of the most important Renaissance sculptures, ranking alongside the more famous white marble David by Michelangelo, which was restored in 2004.