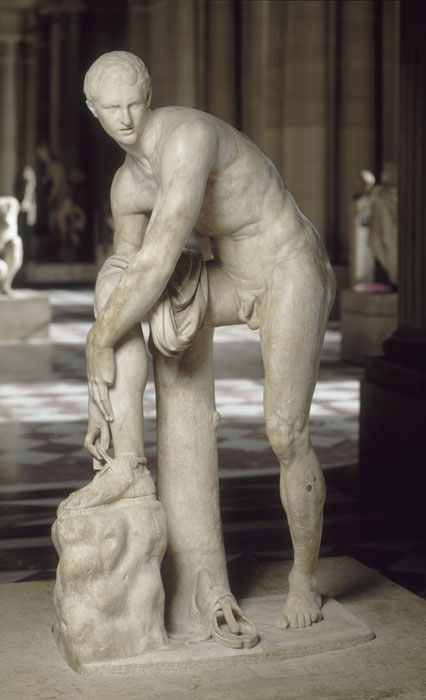 The Salle des Caryatides contains Roman copies of Greek Hellenistic originals, all of which are now lost. In front of the fireplace is the work of Lysippus, and farther down are statues illustrating the range of artistic endeavor in this remarkable period full of contrasts.
The work of the bronze sculptor Lysippus, a contemporary of Praxiteles and official portraitist to Alexander the Great, focused above all on the male body. A very large number of works are attributed to his workshop.
The image of Hermes tying his sandal while listening to the orders of his father, Zeus, is characteristic of Lysippus’s artistic endeavors. It should be remembered, however, that the head, which comes from another copy of the same work, is too small here, and that the incongruous supporting tree trunk under the thigh was added by the Roman copyist when he transposed the bronze original into marble.
Lysippus reworked Polyclitus’s canon by lengthening it. The proportions are freer, the head now an eighth of the total height of the body and the muscle structure more slender – except, of course, in the statue of Heracles to your right. The artist sought in addition to situate the figure in a space that was also that of the observer, with a play of light and shade.
To your left is a group of portraits of philosophers, around Lysippus’s portrait of Alexander. Full-scale portraits were favored by Hellenistic sculptors, but their Roman copyists unfortunately only reproduced the head.